The Mount Panorama circuit in Central New South Wales has always been a great leveller. The steep upward climb and precipitous downward plunge, has humbled many of the world's great drivers.


It was the first appearance of the Bentley marque at the mighty mountain, with the prestigious British brand sharing the lead at several times during the race, including the controversial dash to the finish.

It also saw the fastest qualifying time by a race car ever, including times laid down prior to the introduction of 'The Chase' in 1987, designed expressly to slow cars down on the long, downhill Conrod Straight.

Audi factory driver Laurens Vanthoor blasted his Audi R8 LMS Ultra around Mount Panorama in 2:02.5, eclipsing the time of 2:02.6701 set by Simon Hodge in an F3 Racing Car last year. The car continued its pace on race day with a lap record of 2:03.3091 (Lap 29) and finishing second outright.


The fastest unofficial time still stands at a mesmerising 1:48.88, set by Jensen Button in a publicity event for McLaren and Vodafone in a 2011 MP4 Formula One car.

Email ThisBlogThis!Share to TwitterShare to FacebookShare to Pinterest
Labels: Audi 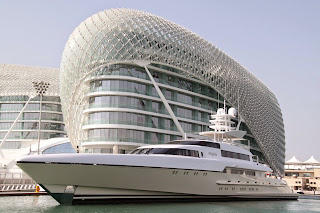 There's a tired old saying in the private yacht business that goes: "A boat is just a hole in the water you pour money into."


Owning the superyacht of your dreams is a defining symbol of your arrival. It's the ultimate imprimatur of success and your membership card to the super elite club.

The world's richest men are in a continual, never-ending contest to build and own the largest, most expensive superyachts on the ocean. Roman Abramovich's $500 million 162m Eclipse currently holds top honours and Larry Ellison's 138m Rising Sun, recently changed hands for a rumoured $300 million.

For even the most successful of businesspeople, ownership of a massive superyacht is an unrealistic exercise. Even for those particularly well-healed captains of industry with a high enough Plimsoll line on their pockets, the logistic and adminsitrive issues are prohibitive.

According to Hugh Simson, general manager of Australian yacht brokerage GTIM, you can quickly estimate the build cost of a large superyacht.

"After you reach the critical length of 100' (30m) it can safely be estimated that build cost is around $1 million per metre."

But don't take your hand out of your pocket yet.

"You can then budget for annual upkeep of your vessel at around 10 per cent of the build cost," says Simson.

It can be easily deduced then that the size of any superyacht is directly connected to the net worth of an individual, or in many cases, their exposure.

So, if the pleasures of a 50 metre floating pleasure palace appeals to you, but the ongoing fiscal commitment does not, chartering is a realistic option.


What does chartering involve?

Chartering any vessel is just a nautical term for 'hiring' and that hire can come with or without lots of options. From 'bareboat', where you are effectively handed the keys to an empty ship, to a 'time charter' where, as the term suggests, you hire the vessel complete with all crew and facilities for an agreed period.

You can charter anything from a dinghy to an ocean liner and many people and corporations do just that.

Want to take a few friends or family fishing? Then a 10 or 15 metre sport cruiser with game fishing chair will get you started.

Organising a global sales meeting at sea? Then, look at a 100m mini cruise ship for 100 delegates complete with catering, entertainment and conference facilities.

There are lots of good reasons to charter besides dodging the hassles of ownership. Your CFO can probably tell you that chartering can be tax efficient under certain circumstances.

A smaller power boat with crew suitable for fishing or simple excursions should start at around SGD$2000 for a decent vessel.

Getting fancy with a proper superyacht for around 30 persons on a day trip will set you back around SBD$15000.

Looking for a longer experience? Here's an example. The ex-Jack Nicklaus superyacht 'Sea Bear' is based in Singapore. This 40m Westport vessel was built in 2005 and sleeps 10 guests in five luxury luxury. With a crew of seven, it's yours for US$80k a week. You pay for fuel and food.

Going a bit crazy, or looking for a corporate gig? The two luxury twin cruise ships from the SeaDream Yacht Club (call them megayachts if you like) carry 112 guests in 56 twin staterooms. In between scheduled cruises, you can charter the entire vessel, with all 95 crew and everything on board from around $500,000.


Walk the walk, not the plank.

A superyacht, while not a precise term, is generally understood to mean any vessel over 24m (79') in length. It should be privately owned and is almost always crewed by professionals. Can apply to both power and sail.

A megayacht is another term that came into popular usage to describe the largest superyachts of which there are around 25 currently operating. Again, not a precise term, but anything over 50m can be called a megayacht.

The term gigayacht has also appeared to describe apex vessels 100m and over.

Vessels up to 100 feet (30m) are commonly measured in feet, and over that, in metres.

The entertainment area on a superyacht is called the saloon (not salon) and beds are called berths. Fancy cabins are often called staterooms and those with private facilities, just like a hotel, are called ensuite.

A vessel with a 'flybridge', or more correctly, 'flying bridge' has a separate set of controls on the cabin roof to allow the skipper a full 360 degree view. Otherwise, it's just a normal enclosed 'bridge' with limited field of view.
Posted by rodeime No comments: