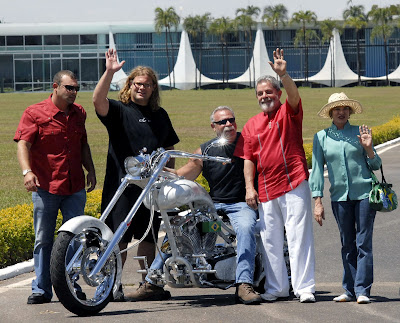 Why bikes and not a desk job? I was never super interested in school, so the whole sitting down all day thing never really worked for me. I grew up in the steel business, so I’ve worked with my hands from an early age. My father was always into motorcycles. He always had a bike or two that he was tinkering around with when I was young, so it was just natural for me to be mechanically inclined.

All In The Family

I share my dad’s name and we share a lot of the same characteristics. Genetically we’re built pretty much the same. The challenge of working with my father is that I have to work with my father... 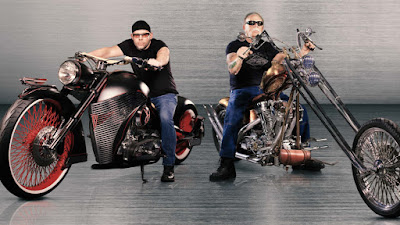 The rewards are obvious; we’ve been really successful. The TV show wouldn’t be what it is without the family dynamic – it gives that genuine quality that people love. And I like to think we build some unique bikes. It’s not easy working with family in general. We spend more time together than married couples do!

You gotta remember my mother weighs in heavy too. She’s just a different person – more reserved – just the complete opposite of my father, so I had that influence as well. I’m a calmer person than my dad. He likes to scream and throw things around, while I like to rationalize things.

Me and Michael get along really good. He’s the youngest boy, and I’m the oldest, so he’s my little brother. The way Mikey is is the way everyone wants to be. He’s just really carefree and laid back…maybe too laid back at times. He’s a funny guy and very intelligent. That’s part of the combination that makes us all work well together.

There’s no sibling rivalry, but my father is forever in competition with me. I can’t quite figure it out. When people strive to be young, they tend to get very competitive I guess.

We have a niche with theme bikes that’s really set us apart. You don’t have to really like motorcycles to appreciate a theme, like a bike that looks like a fire truck or a piece of Caterpillar equipment, et cetera.

The nice thing is we can combine function and art. That’s fun for me because I am mechanically-minded and appreciate any type of art. A bike can have more of a sculptural look, and you can still be able to ride it.

Me personally, I’m not a hardcore biker, whereas my father is definitely a hardcore biker. I ride our bikes for what we need to do and that’s it. I’m not necessarily a recreational rider; I’m more into the design aspect of it.

In terms of the design process, I can’t draw very well…I can’t draw at all actually. From the beginning, it started with me just designing out of my head. That was the only way I knew. Back then there was just the three of us, and I was pretty much the only guy fabricating, so it wasn’t as hard because I didn’t have to relay anything to anyone and I could just work out of my head.

Seemingly those days are over for now, but it’s become easier because we’ve grown. We’ve become extremely sophisticated in our technology, and we have more people. We’re able to use a computer and submit our designs to big corporations or even individuals, way before we build the bike. We can then build the bike pretty much identical to the picture.

My favourite bikes? Definitely the Black Widow Bike, which was the second web-theme bike that I did, and that was on the first episode of our series. Definitely, the Fire Bike, because it paid tribute to 343 firemen that died in 9/11. In our very first pilot, I did the Jet Bike, which was like a military jet, and just a really cool bike. Those three stand out, but we have so many more.

We have a new line of production bikes coming out, something more affordable and easily duplicated, yet still extremely custom-looking, compared to what else is out there. We’re probably still making around 150 bikes annually at this stage. Over the next few years, we’ll surpass that by far.


We’ll always have a small business feel, but you do want the business to keep growing. We’re expanding constantly. Our show is very popular in 160 countries, so right now we do a lot of travelling and business overseas. We have everything going on at all times. It’s amazing.

I’ve never really been star struck, but I’ve met just about everyone in Hollywood and I’m friends with all kinds of different people. I’m a big Giants fan and I just got to build a Giants bike. I had Michael Strahan come down to the shop.

The time that Ewan McGregor and Charley Boorman came was really cool. It was an honour for us because they had put all this work into going around the world on their bikes, and for them to make the very last leg of the trip and invite us along, that was a big deal; it’s not just “stopping by,” you know? It was really emotional for them, and we were really happy for them. Since then we’ve done some other stuff with Ewan McGregor in England.

Will Smith’s a great guy too. We had him and his son down when we did the I, Robot Bike. We had Lance Armstrong, Billy Joel, Bill Murray, and so on and so on. It’s neat because you realize you have a lot in common with all these people. We also share that celebrity, which is something anyone with any level of fame has to deal with.

Biking is a real boy’s club and probably always will be, but women are absolutely more involved than they used to be. More women are riding these days, and you see way more women than you used to at bike events. They used to be more on the back of the bikes, and now they’re riding more Choppers.

We haven’t built a lot for women, maybe two bikes in total, but I’d say probably a third of our workforce is women, because women are smarter. Things wouldn’t run as smoothly without them.

Currently, we have three builds going on at the same time, which we’ve never really done before. We have Strike Ten Bowl, which is a big bowling company, we have Mercedes EMG, which is the engine company for Mercedes that builds our high-performance engines. We also have this McCuff Bike that is going to be entered into a competition at the S&S 50th-anniversary show. Phew! We’re just going like crazy right now.

I’m sure I’ll always be in bikes on some level, but down the road, I’d like to do some different things. Motorcycles are our mainstay, but with the exposure we’ve gotten, we could really do anything.