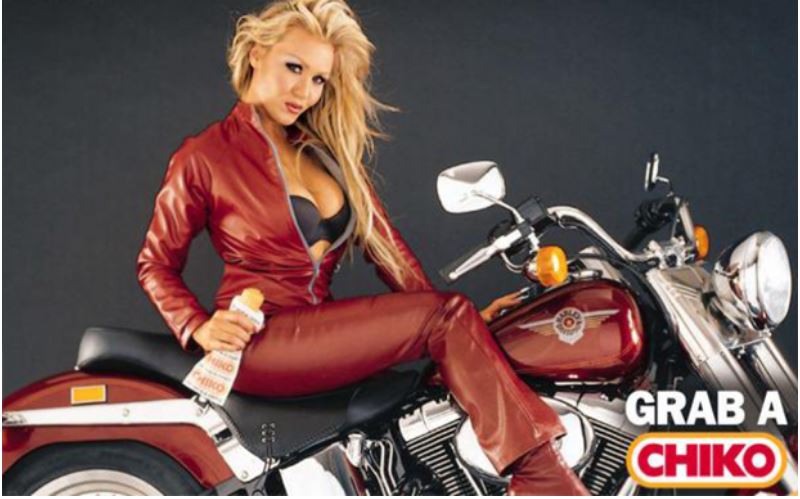 It might be politically incorrect today to promote Australia’s iconic Chiko Roll with a scantily clad woman draped provocatively across a Harley-Davidson, but for more than 30 years, this is what the humble pork and vegetable roll did, shooting the homegrown snack food to ‘rock star status’. In fact, the racy Chiko Roll posters and billboards of the early 2000s featuring glamour model, Sarah-Jane, and her FLSTF Fat Boy were even banned following a public outcry.

Hands up everyone who can remember having a second look at those famous "Chiko Chick" posters that appeared on the walls of the local takeaway and fish and chip shop. Yep, that was most of us and all the blokes seemed ready to "Grab a Chiko". At the height of their popularity in the 1970s, 40 million Chiko Rolls were eaten annually, with a million exported to Japan.

And along with the beautiful model was that other object of masculine desire, the Harley-Davidson motorcycle. So, by extension (oops, wrong word), if the aspiring bloke could attain the magic trifecta (bike, babe and Chiko Roll) his ascension to masculine superiority was complete.

The Chiko Roll was first sold in 1951 and was an instant hit. And while it is true that the first Chiko Roll advertising poster featured a motorcycle of British manufacture, that error was later corrected and replaced by the more recognisable America icon, the Harley-Davidson.

That era of ‘babes and bikes’ and their hot Chiko Rolls may be over, but their place in history will always be remembered. The ‘millennial’ era Chiko Chick, Annette Melton, may have swapped the Hog for a classic Dragster pushbike, but after more than 60 years, the legend lives on.

“You can’t knock the roll”

Footnote: The Fat Boy lives on, celebrating 30 years. You can ride away on Harley-Davidson history today with the new Fat Boy 30th Anniversary Limited Edition, based on the Harley-Davidson® Softail® platform launched in 2018, the Fat Boy motorcycle re-defines an icon with power and presence.