The fathers of the motor car

No single man can rightly be called the inventor of the motor car; it was the product of many minds.

Two men, however, are generally regarded as the fathers of our modern mechanical transport: Karl Benz and Gottlieb Daimler. Benz, born in Mannheim, Germany, in 1844, designed and made the first petrol-driven horseless carriages to be produced commercially, and Daimler, a fellow countryman, born ten years before Benz, was the originator of the unit from which our modern engines are derived

Karl Benz was the son of one of the first locomotive drivers, and like his father, his bent was for mechanical science rather than the arts.

At his local school he became interested in photography (then in its infancy), in chemistry, and in clockwork motors, 'learning to feel the marvellous language that gear wheels talk when they mesh with one another', as he says in his autobiography.

When Benz was sixteen he entered the Karlsruhe Polytechnic; this proved to be the turning point of his life, directing his interests to 'a unit that could supplant the steam engine'. 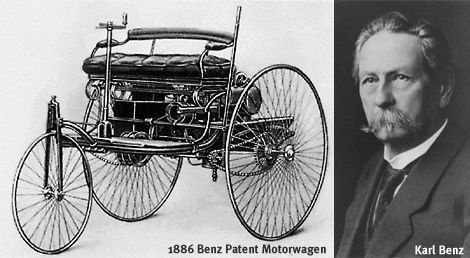 When the young Karl had completed his courses he found a lowly job in the Karlsruhe Engineering Works. After a time it proved to be a dead-end post and he left.

History might have been otherwise if he had not left at that moment in time. He might never have succeeded in his later work; he might never even have taken it up. Or he might have produced his cars considerably earlier, for, by an odd chance, Gottlieb Daimler took over as senior engineer soon after Benz left. They had almost made contact.

In 1871 Benz went into business on his own. He opened what he called a 'factory for tin-working machinery', only to begin foundering in financial difficulties brought about by a stock market crash.

But Benz was used to lack of money-he had been raised in poverty--and had the necessary drive to combat it. He borrowed, founded a new business, designed a stationary engine, and began producing.


These first engines, some of them still workable today, carried his name around the world. His business prospered, he expanded, and persuaded his investors to allow him to devote some of his time to his first love, a mechanically propelled vehicle employing power more efficient than steam.


He chose as his ‘shell a light carriage with bicycle type rubber tyred wheels. In place of the shafts he put a third (steering) wheel. The small, four-cycle engine was built under the seat. A curious footnote to this is the fact that Benz made this first unit to incorporate a horizontal flywheel-he thought that a vertical one would prevent steering by its gyroscopic action!


In July 1886 an announcement in the local paper, the Neue Badische Landeszeitung read: “A velocipede driven by Ligroin gas, built by the Reinische Gasmotorenfabrik of Benz & Cie. ... was tested early this morning on the Ringstrasse, during which it operated satisfactorily.' Little enough to say about the event that heralded a new era.

The first long distance test, however, came as a surprise, even to Karl Benz himself. Aided by their mother, his two sons, Eugen and Richard, borrowed the machine while their father was still asleep onemorning, and took it for an unofficial joy-ride. They drove it the amazing distance of 70 miles—from Mannheim to Pforzheim-and back again. Despite rough roads, darkness, steep gradients, and several small breakdowns the boys, aged fifteen and thirteen, managed the trip without any major mishaps, performing all the roadside repairs themselves.

The boys and their father-learned two useful lessons from this escapade. Firstly, it proved beyond doubt that the car was a practical proposition; and secondly, that it needed an extra low gear to negotiate the gradients.

Success in this project encouraged Benz to turn to the development of a four-wheeled car, and by 1893 he had built his first car 'with a steering mechanism with steering circles set on a tangent to the wheels'. He called this car the ‘Viktoria’, not after the English Queen of that name as is often thought, but to celebrate his victory over the complex steering problem.

Model after improved model followed from the Benz factory. Styles were varied to suit diverse purposes. The Dos-à-Dos, The Brake, the Duc, the Mylord, the Ideal-greatly sought after in Englandand many other types poured out of his Mannheim works, until by 1899 he was producing nearly 600 cars a year.

Gottlieb Daimler was forced by his father into a classical education. But Latin was less attractive to him than practical, plane and solid [to be continued]