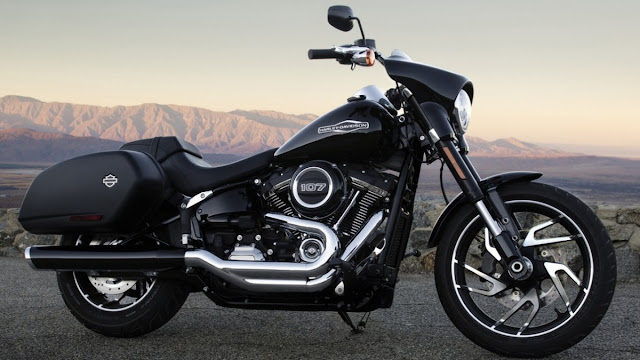 When Harley-Davidson announced the death of Dyna and the new Softail range, tongues were certainly set wagging. Add the bold claim by H-D that they were set to release 100 new models in ten years and you have a minor sensation on your hands.

Motorweb has ridden all the Softail models now including, as of last weekend, the sleek new Sport Glide 107 (FLSB). And we gave it quite an outing.

Grey Ghost regular, Paul D, was so enamored with our Mudgee run a few weeks back, he thought it was worth putting the band back together and our motley entourage set out for the big lap via Putty Road, Bylong, Mudgee, Hill End and Capertee. As we found out from our Australian Road Rider feature, it’s a route to test both bike and rider.

Mixed in with BMW adventure bikes, two Triumphs and a tall Ducati Multistrada, the Sport Glide had to work to stay on the pace and for this rider of modest ability, it didn’t turn out to be such a tall order.


The low slung (680mm) seat means regular-sized blokes like me can throw a leg over without putting a milk crate down first. The smooth panniers sacrifice a little capacity but don’t intrude on the lines of the bike, keeping the visuals neat. The quick release lever lets you pull them off in a flash along with the front fairing if you want to go naked in a hurry.

The minimalist fairing looks pretty ineffective but is surprisingly functional. It won’t stop the breeze when you open up the throttle, but it does reduce the aggressive buffeting found on naked bikes and I could even wear my peaked open face helmet without too much discomfort at legal speeds.

We’ve talked about the new engine a lot and this Milwaukee-Eight® 107 loves the highways and backroads equally. The effortless torque is always there, even down to around 2000 rpm, and it’s no issue to pull out of the sharp hairpins. Leaning the bike over is not quite ‘sport bike’ easy, but the forward footrests and 120mm ground clearance give you extra leeway. You’ll drag your heels before the pegs hit the tarmac.


I wouldn’t want to carry a pillion all day without installing the optional backrest, but you can make the ride easier for both of you by dialling up the suspension thanks to the handy externally adjustable shocker found on several Softail models.

The H-D tagline ‘call it a tourer, we dare you’ has some merit because, while it tours easily, it does handle with surprising nimbleness for what is still a big 300+ kg machine. Big (4-piston fixed front and 2-piston floating rear) ABS brakes make sure things come to stop quickly too.

In the end, you don’t want to take my word for it, so get in to your Harley-Davidson dealer and test ride for yourself.

Sport Glide is priced from $27,750 (ride-away)
Posted by rodeime No comments: