Closet biker, Roderick Eime, examines the allure behind this robust and respected brand and finds it’s getting easier to get on a ‘hog’ than ever before.

When anyone mentions the word ‘iconic’ and ‘motorcycle’ in the same sentence, chances are they’re talking about the venerable US brand, Harley-Davidson.

Since the first prototype was tested in 1903 and for the next century and beyond, the Harley-Davidson brand has continued to reflect freedom and hard-edged glamour with an exceptional degree of brand loyalty and admiration. A 2013 survey placed Harley-Davidson as the fourth most respected brand in the USA with global sales in excess of 250,000 bikes.

But ask any owner, even aspiring ones, and the purchase of a Harley-Davidson is not based on any financial analysis. It comes from within and is driven by a desire for self-expression with a middle-finger salute to the conformity and mundanity of modern life. Let’s not beat around the bush here, it’s pure escapism in the form of a raw, aggressive, sexualised icon.

Just like cosmetics, soft drinks and fast food, brand alignment is key and product placement crucial. The number of celebrity owners reads like an Academy Award roll call and the motorcycle itself is a star in its own right with innumerable movie appearances throughout the decades.


Cinema-goers will be quick to recall the scene from 1991’s Terminator 2 when Arnold Schwarzenegger rode the Harley Davidson "Fat Boy" like he stole it. Which he did. Or 1969’s unforgettable Easy Rider, where ex-police Hydra-Glides were converted into the famous pair of choppers, Captain America and Billy Bike, ridden by Dennis Hopper and Peter Fonda.

Movie trivia buffs will know exactly which motorcycle Marlon Brando rode in the 1953 classic, The Wild One - and it wasn’t a Harley. But notwithstanding, the star did own a black 1970 FLH Electra-Glide and it recently fetched more than $250,000 at auction.

Many Hollywood stars are so enamoured with their brush with Harley-Davidson fame, that they have become owners. And we’re not just talking about the stereotypical tough guy either. Many no-nonsense glamour gals don’t mind their million dollar bottoms in the seat of a Harley-Davidson.


Cashing in on the feminine appeal, Harley-Davidson commissioned a series of titillating video- and photoshoots with American supermodel, Marisa Miller. Instead of just being a bit of pinup decoration for the boys’ workshop or shed, the leggy blond whose credits include Sports Illustrated and Victoria’s Secret, is also an owner of a 1200 Nightster and an ambassador for the brand.

“People see me as a supermodel on the cover of magazines but no one would ever guess I do actually ride a Harley,” says Miller, “so it’s important to see that if I can do it, anybody can do it. Whether you are a guy thinking about it and don’t know how to go about getting into it, or a woman who may be intimidated, just go for it, challenge yourself and break free!”

The model range of Harley-Davidson motorcycles has been static for some time, with the staple models regularly receiving cosmetic and equipment updates instead of major re-engineering. Brand diehards were set all atwitter, however, when Harley-Davidson introduced its first all-new model in 13 years with the radical, lightweight, liquid-cooled Street range comprising a learner-approved 500cc and a bigger 750cc unit. Only the smaller 500cc bike is available in Australia. The thinking behind this departure was to allow Harley-Davidson an entry point into the SE Asian market, in which it currently has little impact.

In Australia, the Street 500 is the only bike approved for LAM scheme in all states, providing an opportunity for new riders to join the brand and ride with dignity while serving their time on L-plates.

The recent launch of the 2016 range of full-size ‘heavy’ motorcycles is spread over seven model categories with the new Street making eight.

The new Iron 883 and Forty-Eight models, Harley-Davidson claim, are the purest expression of their Dark Custom design movement yet. Add to this the most powerful cruiser lineup in company history, and a broad range of performance and styling enhancements throughout the range and you have an eternally exciting offering that keeps the brand relevant and highly desirable. 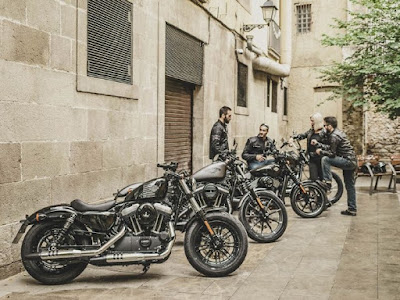 A bold new styling initiative, Harley-Davidson, makes no bones about it: these bikes aren't for everyone. It’s their special antidote to ‘bland leading the bland’.

They claim not everyone appreciates a motorcycle stripped down to its raw, custom essence and it takes a one-of-a-kind rider to appreciate the potential of a bike that’s ready to be customized any way they see fit.

No frills. Pure thrills. For the chosen few willing to ride like this, these basic bikes are positioned at an equally aggressive price point, making them easier than ever to throw a leg over. 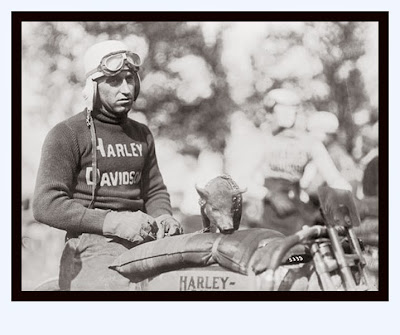 In the 1920s, a group of tearaway farm boys raced Harley-Davidsons with a piglet as their mascot. Now the term is used as an acronym for ‘Harley Owners Group’. True story.

Related story: Get out on the highway. Motorcycle touring in Australia