The Cars are Stars

With summer almost upon us, movie goer and car buff, Roderick Eime, looks at the allure of the convertible and its enduring screen presence. 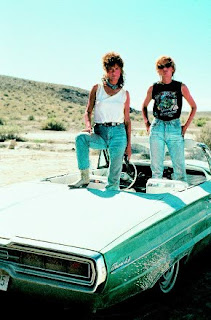 The image of Thelma and Louise and their 1966 Thunderbird convertible plummeting over the precipice in the heart-wrenching finale of the 1991 cult classic is perhaps the scene that will always define the character of the convertible in popular culture. Freedom, hedonism and a touch of rebelliousness will always epitomise the top-down attitude. James Dean and his ultimately tragic Porsche 550 Spyder absolutely cemented the “Rebel Without a Cause” into the romantic psyche.

Thanks to , the image of the convertible roadster will always hold the appeal of a car constructed purely for enjoyment and allure. The DHC (Drop Head Coupe) has featured large in movies with style and sensuality as their theme. Dustin Hoffman’s Alfa Spider Duetto in the Graduate, the Chevrolet Corvette in Route 66 or even the tortured Ferrari 250 in Ferris Bueller’s Day Off all invoke the free-spirited, fun-loving pleasure-seeker so often portrayed on the big screen.

Here’s a rolling credit of famous convertibles and their co-stars - and we match them to their latter-day showroom equivalents. 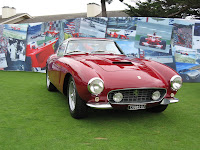 The 1961 Ferrari 250 GT California is one of the rarest Ferraris of all time, with only about 100 ever built. And when the lunatic car park attendants thrash it to within an inch of its life in Ferris Beuller’s Day Off and it’s later wrecked when launched out of a window, Ferrari fans were in uproar. Relax, the film car was a replica built on an MGB chassis. Nevertheless, Ferrari were so incensed at this, they sued the replica company.

Released in in mid-2005, the F430 gloriously perpetuates the Ferrari convertible heritage, offering the topless versions as a premium alternative to the coupe. The F430’s Pininfarina styling, both in hardtop and convertible, are derived from the iconic “shark nose” design of the 1961 F1 car that took Phil Hill to world championship status.

Long gone are the painstaking procedures of stowing the hood. This stylistic flourish comes courtesy of a soft top system designed to take up a minimum of space. The fully-lined electric hood is completely automatic, and is opened and closed by seven electrohydraulic actuators. The hood folds over twice before disappearing completely into a well just ahead of the engine compartment, leaving the engine in full view at all times.

For dreamers, there is always the 320 km/h SuperAmerica V12. Just six of these incredible beauties came to last year and despite the $650,000 price tag were sold before they rolled off the ship. Keep an eye out for one.

When James Bond parked his “shaken not stirred” derriere in the sublimely retro-styled aluminium-bodied Z8 in "The World Is Not Enough", everybody wanted one. But BMW were determined to make the Z8 a rare beast and only three of the 5700 production run ever found their way to in mid-2000. Priced at $328,000, they were snapped up by avid collectors despite the fact that the left-hand-drive-only could never be registered for road use. Now out of production, the Z8 shares the identical 294kW, 5.0 litre, high-revving V8 as the M5 and accelerates from 0 to 100 km/h in a trifling 4.7 secs.

Despite tantalising us with the likes of the Z8, BMW has always maintained a selection of stylish cabriolets for us regular drivers. The 3 Series convertible is best expressed in the just-released, top-of-the-line 335i with its all-aluminium Twin Turbo 225 kW straight-six engine. The 335i is priced at $104,500

Again, the roof is a breeze, excuse the pun, and it takes just 22 seconds for the fully-lined retractable hardtop to unfold itself from behind the rear seats. The three-piece lightweight steel roof provides both superior sound insulation and extremely large windows for excellent visibility.

Despite its diminutive size and “entry level” status, the Alfa Romeo Spider had an inordinate effect on movie goers when it starred alongside Dustin Hoffman and Anne Bancroft in the 1967 smash hit, “The Graduate”. Just one year after its official launch at the 36th Geneva Motor Show, the Pininfarina-designed soft-top was an instant success and began a production dynasty that continued until 1993.

Today the Alfa Romeo Spider enjoys a renaissance with two models superseding the last of those built on the original 105 series chassis. The current model, powered by either a 2.2 litre, 136 kW 4 cylinder or the state-of-the-art 191 kW 3.2 litre Quad Cam V6 in AWD is a quantum leap from 1966. Even then, the ground-breaking Duetto, with 4-wheel discs and 5-speed transmissions, was similarly cutting edge.

As with most modern convertibles, the Spider’s hood is fully automatic and tucks away unobtrusively to produce a seamless, streamlined sports car. The 2.2 litre version starts at $76,950 while the more desirable 3.2 V6 kicks off at $100,950

A firm favourite with the Californian glitterati, the sexy SL, CLK and SLK roadsters are always popping up in the glamorous TV series and movies. Spotters will notice the CLK in ‘Mean Girls’ and ‘Havoc’ and SLK in The OC, but the CLK gets bare-chested in Mission Impossible 3 when Tom Cruise commandeers one for a heart-stopping dash to rescue his wife.

Move into the SL-Class statusphere and here you’ll find the real pedigree machines. With a racing and performance heritage back to the great road races of the ‘50s with Stirling Moss at the wheel, SL-Class Roadsters don’t come cheap. Starting at $214,000 will get you the SL 350 V6. Serious shoppers can go kick the tyres on a SL 65 AMG with bi-turbo V12. This 450kW racing car costs $415,900. 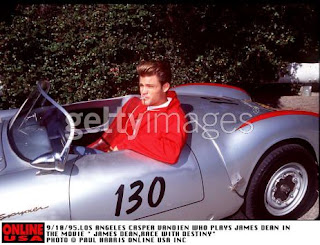 Porsche, celebrity, sports car and glamour can be said in the same breath. To list the movies and Hollywood-owners of Porsche 911s would fill this issue, but the defining event in Porsche’s rise to ultra-desirable status occurred when movie bad-boy, James Dean, died behind the wheel of his now legendary 550 RS roadster “Little Bastard” in 1955. The circumstances of the crash have always remained controversial and the recovered wreck and its parts were believed to be cursed as they went on to cause more mayhem until the car mysteriously vanished in transit in 1960, never to be seen again. Jerry Seinfeld owns a flawless 550 and is a regular concours winner.

In the spirit of the 550, Porsche continue to release sports-orientated, pared down roadsters for the general market. The Boxster range was recently revamped with larger engines and the latest Boxster S now totes a mid-engine 3.4 litre flat six of 217kW giving it real cache among its higher priced stablemates like the 911 and 911 Turbo. Starting money is $108,000 for the 2.7 litre (180kW) Boxster, but if money is no object, the 911 Carrera 4S Cabriolet (3.8 litre, 261kW) will set you back $265,100 with Tiptronic transmission.

For the Rest of Us

Although it may not crow legend status yet, the beautifully refined Lexus SC430’s list of movie credits grows too with The OC, Terminator 3, CSI, 24 and Legally Blonde 2. The SC430 is a very driveable car, far removed from the blowy drop-tops of old. The exemplary aerodynamics is one of the standout features of the SC430, painstakingly designed to deliver the sheer thrill of a top-down spring or summer drive without constantly attacking the coiffure. Tyra Banks loves hers.

Still waiting for its big break in the movies, the Holden (Opel) Astra nevertheless offers the best of both worlds. In top down mode you have a stylish convertible for summer and a glamorous hard-top coupe for winter. Best referred to as a “retractable hard-top”, the roof cleverly stows itself in the boot in a totally hands-free operation

Who are Tia and Mia? They are the cheeky little cheerleaders in the 2006 animated hit, Cars. In overseas markets, the MX-5 is known as Miata.

In many ways, the pint-sized MX-5 has become the modern epitome of an affordable sports car. In a genre once dominated by the likes of MGB and Triumph, the purpose-built, superbly engineered little rocket has created a cult status for itself since introduction way back (can you believe it) in 1989.

Cleverly designed to a “timeless” classic line resembling the early Lotus Elan, the MX-5 is everything a fun little roadster should be and with sales of 750 thousand worldwide, it will be with us for a long time yet. True, sales are at their lowest since introduction, but the all-new 2.0 litre third generation MX-5 is just starting to make its presence felt. Grab one for $42,870 upwards.

Relaunched in June this year, both the award-winning 2.0 TFSI and potent 3.2 V6 engine, with S tronic transmission, are available for Australian buyers, priced at $77,500 and $92,900 respectively.

Spider or Spyder? What does it mean? The term so often applied to convertible cars, particularly those of Italian origin, has nothing to do with the common eight-legged, web-weaving arachnid. Ask an Italian to pronounce “spider” and you have “speeder”. True.

A cabriolet, like so many car terms, was derived from its horse-drawn equivalent; namely a light, two-wheeled cart with a folding top. Convertible is the interchangeable term more favoured in the American market.

A ‘roadster’ is a more basic form of convertible, traditionally a 2-seater without roll-up windows or even a proper roof. A barchetta is an Italian roadster.