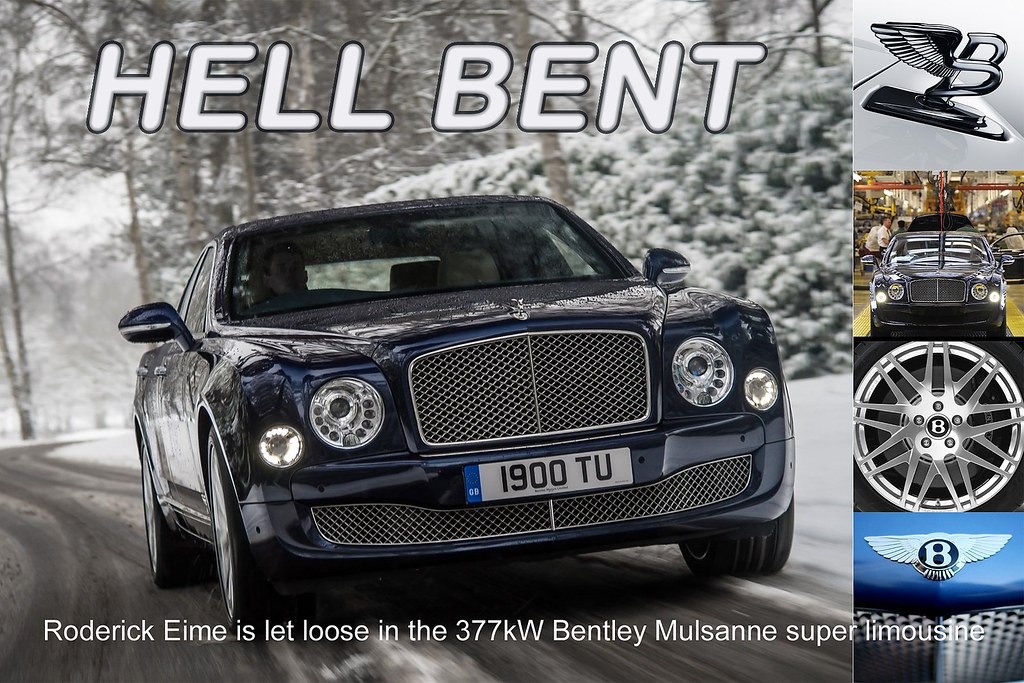 Easing my bottom into the diamond quilted hide seats is the first installment of my all-sensory introduction to the mighty Bentley Mulsanne. We all remember that ‘new car’ smell from our childhood when we all too willingly assaulted ourselves with the pungent aromas of plastic, vinyl and sundry acrylic sealants. In the Bentley, however, my nasal passages are delicately caressed with nuances of century-old burled walnut and perfumed Scandinavian leather.
My hands embrace the steering wheel, itself wrapped in hand-stitched hide against a backdrop of highly polished solid wood panel. The dash, while replete with every conceivable visual aid, still pays homage to the golden age of motoring with delicately replicated ‘organ stops’ in the air vents. These push-pull actuators are even meticulously tuned to simulate the look and feel of a vintage stopper.

You could easily spend an hour or more consuming the dizzying array of goodies within arms’ reach while the custom Naim 1.1kW 13-channel audio system rouses you with Bach, Bolan or Bacharach.

While that figure is impressive on its own, it’s the 377kW exuded from the massive 6.8 litre twin-turbo-charged V8 that will get your pulse racing. Even in a massive vehicle that weighs in at more than three tonnes, the Mulsanne can certainly get up and go. The huge L-Series powerplant traces its heritage back to 1959 and now, at the peak of its development, produces multiple time the power and torque of its predecessors, while reducing emissions to forensic levels. That said, when urged, you can reach the legal speed limit in around 5 seconds while on your way to the (highly illegal) top speed of almost 300kmh.

There has always been a quaint old saying that if you need to ask the fuel economy, then you can’t afford a Bentley, but for the record, a carefully driven Mulsanne will deliver a comparatively frugal 10litres/100km on the open road.

To appreciate the level of attention that goes into a car with a pricetag more in the realm of real estate, we need to visit the historic Bentley factory in Crewe, UK.

To the Home of Bentley

The venerable Pyms Lane factory once produced the magnificent Rolls Royce Merlin aero engines that many say won the war for Britain when fitted to such illustrious aircraft as the Lancaster bomber and Supermarine Spitfire.

Today’s manufacturing process is whisper quiet by comparison. Conveyors silently transport the chassis above our heads where teams wait to perform their allotted tasks. Axles, transmissions, electrics and the coveted all-leather and walnut interiors are delicately installed without any sense of urgency. Even though the Crewe factory is now producing more Bentleys than ever before – as many as 10,000 in a year – there is no rush.

Across from the ‘line’ is a diligent ‘sewing circle’ where craftsmen and women sit at their benches hand-stitching the soft leather to the rims of steering wheels.

“Depending on the degree of customization, it can take up to 16 hours to stitch a single wheel,” we’re told by David, a craftsman who considers himself a mere pup, with just a decade of service.

Customisation is a hallmark of the Bentley ownership experience, evidenced by the range of vivid colours rolling along the production line. Lime green, fire engine red, and submarine yellow adorn the customised line-up, while most customers, I’m told, are content to choose from the generous palette of more than 100 factory-favoured tints. Interiors too can be customised with your own shade of leather, or if leather is not your thing, customers can request Oxford cloth.

While walnut is far and way the most favoured timber for the interior, elm, oak, maple and even eucalyptus are on hand. The top-of-range Mulsanne uses solid timber, computer cut to perfection on massive machines, then hand-finished.

“We’ve had some curious requests,” Robin Peel, Head of Marketing and Communications and our guide tells me, “including one lady who was so taken by the colour of a favourite kitchen appliance, she brought the whole item into us so we could copy the colour. It’s not unusual to be shown samples of nail polish, for example.”

Clearly, Bentley is a brand that attracts colourful individuals and the rollcall of luminaries who own and drive a Bentley is vast. Of the most visible, David Beckham stands tall in his Continental, while Hollywood heartthrob and tough guy, Mark Wahlberg has been seen in his Mulsanne. Of the more colourful variety, Paris Hilton, is often spotted showing off along Rodeo Drive in her custom pink GT Coupe. In popular culture, Ian Fleming’s original James Bond drove a Mark IV, a variant that never existed, while several real Bentleys made cameo appearances in the screen adaptations. The Avengers’ character, Steed, drove a number of different Bentleys, one of which was a 1928 Bentley 4 1⁄2 litre.

While some outlandish personalities may be attracted to Bentley, there is still the sober society who takes comfort in the marque’s unrivalled prestige and workmanship. HRH Queen Elizabeth II is the proud owner of a custom-built state limousine while her grandkids, Prince William and Catherine, The Duchess of Cambridge, were seen alighting from a sparkling Flying Spur for a red carpet event.

Most cars, Robin tells me, end up in the US or the Middle East, but more and more are heading to Asia, particularly China.

With Bentley approaching its centenary, the simple guiding principles instilled by the founder, Walter Owen ‘WO’ Bentley, still stand true to this day, perhaps even more so.

“To build a fast car, a good car, the best in its class”

Bernard Rubin was the first Australian to win at Le Mans. He did so in 1928 in a Bentley 4½ Litre. David Brabham was the fourth Australian winner (2009) and now drives for Bentley in a Continental GT3.

Many people still recall Bentley as a ‘badge-engineered’ Rolls-Royce, but the two have been entirely separate entities since 2004 when Bentley became part of the Volkswagen group.
Posted by rodeime

Email ThisBlogThis!Share to TwitterShare to FacebookShare to Pinterest
Labels: Bentley