Looking for adventure after a hard few weeks led us to an awesome company called RIDE360.

Twenty-two middle-aged men met in the pouring rain early on Saturday morning. Armed with route waypoints rather than directions we dispersed into the south coast Highlands with a halfway point at Braidwood bakery and final destination the pub at Batemans Bay.

David and I found several lookouts along the way to Braidwood and early lunch enjoyed at Cambewarra Mountain lookout cafe.

Smiling, exhausted and thirsty we checked into the Bayview hotel in Batemans. If you're ever in Batemans DO NOT stay here. ($40 rooms should explain it all.)

Up early for new routes and the group disappeared into the morning mist for another day of screaming into your helmet. Today was some of the best offroad riding I have ever experienced.

Gravel, mud, clay and some sort of hard-packed super smooth dirt with a fine slippery powder on top. We followed majestic rivers and crossed their tributaries. We rode to the top of mountains up near-vertical tracks (not really but it felt like it).

I almost died. Sort of. 80kmh on a clay road straight into a hole covered in loose clay kicked me out of my saddle. I had my girl airborne more times than I should have. 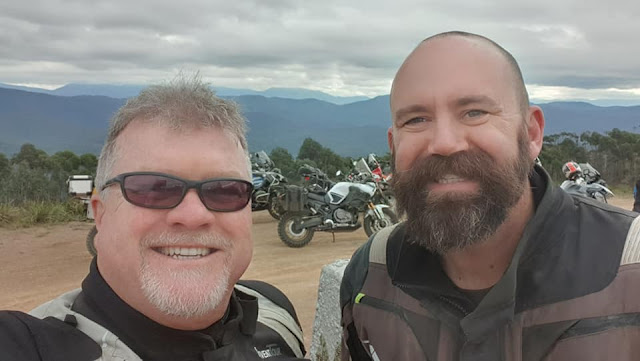 Grinning from ear to ear and doing the Dangerman dance David and I had a ball.

New South Wales is amazing. Get out and get lost, its the best.