Subaru: When the Going Gets Tough 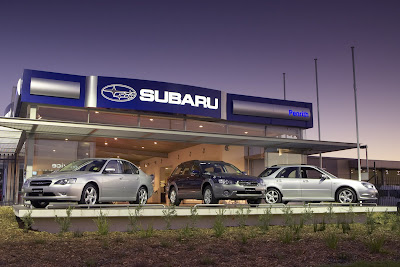 In just 35 years, Subaru has flourished in a land known for its hard knocks and even harder drivers.

Subaru’s 1973 entry into the Australian automotive marketplace coincided nicely with flared trousers, platform heals and the euphoria of a new reformist government under Gough Whitlam.

The awkward-looking Subaru Leone was reminiscent of the lonely geek in the corner at the party and ownership was for those attracted to the little sedan’s undeniable practicality and reliability. Style and street ‘cred’ would have to wait.

We saw a glimpse of the future when the unknown actor Jackie Chan piloted a wild, high performance Subaru Station Wagon in 1981’s madcap ‘Cannonball Run”, even if it was disguised as satire. Today, Subaru’s ‘recreational’ wagons, the all-wheel-drive (AWD) Outback and Forester, deliver a staggering performance package in line with their ‘drivers’ stable mates, the Impreza and Liberty.

Unlike the front-wheel-drive Leone of the ‘70s, Subaru have only offered AWD vehicles in Australia since 1998, reinforcing their niche specialty in driver-focused performance and recreational vehicles. So successful have Subaru been that, in the right (or wrong) hands, Subaru’s WRX Impreza is an uncatchable getaway car!

A lot has changed in 35 years and one thing is certain, people don’t point and giggle when you rock up in a Subaru these days. After total domination of our local rally championships until 2005, Australia is now the third biggest market worldwide for Subaru vehicles, after Japan and the United States.

For the regional user, Subaru’s promised diesel engines are possibly the most exciting development and Australia will see them here shortly.

All Torque spoke with Subaru MD, Nick Senior, about the present and future Subaru.

All Torque: Subaru enjoys a strong position in the Australian marketplace. How does the company expect to meet the challenges ahead?

NS: Our unique combination of Symmetrical All-Wheel Drive and Boxer engine continues to be our unique selling proposition. Combined with our safety focus, engineering reputation, durability and proven whole-of-life costs, it makes Subaru a compelling proposition - especially in an economy where people are looking for low-risk, proven performers. The fact that our range covers everything from niche performance models such as Impreza WRX STI to Australia's best-selling compact SUV in the form of Forester, means we have products that appeal to a wide variety of audiences and we believe this positions us well for the future.

All Torque: What is Subaru’s take on the current market and which models are standout performers?.

NS: As with so many industries currently, the automotive market is very tough. However, this has actually presented an opportunity for us, with the attributes outlined above actually attracting new as well as existing customers to Subaru. For example, new generation Forester was Australia's best selling compact SUV last year and is presently the best selling SUV across all categories so far this year. New generation Impreza is achieving our best-ever small car figures and our largest vehicle, Tribeca, has introduced Subaru to a whole new set of customers, looking for a larger vehicle. Together with the new generation Liberty and Outback which will be introduced in September, this gives us cause for optimism in challenging times. It's also encouraging for us that we are selling an increasing volume of range-topping vehicles.

All Torque: Subaru are well known for technical innovation. What new engineering and planning exercises are ahead?

NS: Without giving any secrets away, we have some exciting technologies pending, including the introduction constantly Variable Transmission (CVT) options in our new generation Liberty. This contributes greatly to fuel economy and performance. At the end of the year we will also introduce our first diesel variant, in an Outback. This engine has been getting rave reviews in Europe for its low fuel consumption and refinement, and we've had a lot of interest already. We're also introducing a six-seat family wagon, the Exiga, late in the year. This will expand our appeal to families, with a versatile and spacious cabin that underlines the clever use of interior space by Subaru engineers.

All Torque: Is Subaru exploring hybrid or other “low carb” alternatives?

NS: We demonstrated the plug-in STELLA electric concept in the lead-up to Melbourne Motor Show. This four-door micro car has a range of 80 kilometres, a top speed of 100 km/h and can be recharged to 80 per cent of capacity in just 15 minutes, using a special fast charger, or plugged into a home outlet overnight for a full recharge. This car is going into limited production for sale in the Japan domestic market as a city commuter, from June. It's an exciting development which will be refined and developed considerably in the coming years.

All Torque: Will Subaru diesels find their way into other models here in Australia?

As mentioned, we will launch Outback diesel at the year's end. We've had some cars on test and have been delighted and amazed by the fuel consumption figures we've returned. Depending upon the level of interest, yes, we may have the option to expand this engine into other models in our range.

Subaru has 106 dealers across Australia with an excellent rural and regional coverage from Broken Hill to Kalgoorlie.

For more information about Subaru vehicles, call 1800 22 66 43 to find your local dealer or visit the comprehensive website: www.subaru.com.au

Email ThisBlogThis!Share to TwitterShare to FacebookShare to Pinterest
Labels: Subaru