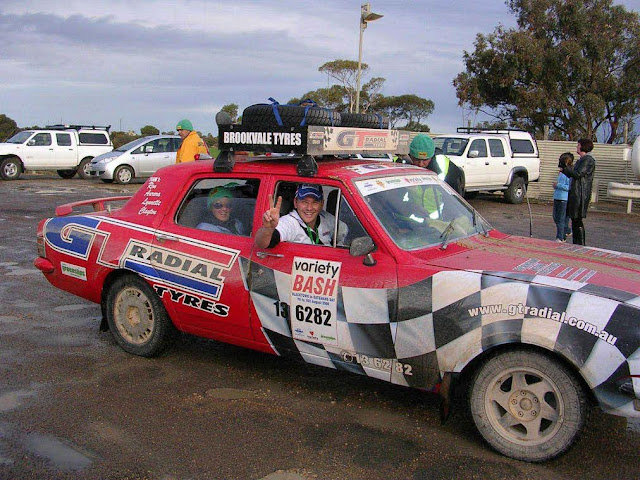 This August travellers on outback roads all around Australia will be taking second looks at some of the cars around them. Old bombs, lovingly and painstakingly restored, painted in lairy colours and with all manner of unusual accessories and attachments will take to the dusty tracks to raise money for Variety, the Childrens Charity in their annual 'Bash'.

Never backward in devising eye-catching stunts, entrepreneurial prankster, adventurer and philanthropist, Dick Smith, set off with a few mates in 1985 on the first Bash, from Bourke to Burketown, in a 1964 EH Holden.

The objective was never a 'race' or 'rally' but instead a fun tour through the country. Cheating, bribery and trickery were encouraged at every point, so long as each payment contributed to the Variety Club's donation tally. In 25 years, the many Bashes have raised over $100 million for ill and disadvantaged kids across Australia.

Individual states now hold their own event, usually around August, with a national event uniting them all every four years. The next one is scheduled for 2014.

NSW's 2010 event is called the BShed to Byron Bay Bash and travels over 3500kms from Sydney to Byron Bay between the 22nd and 30th of August. The expected 100 cars will travel via Cobar, Bourke, Moree, Lismore and good ol' Goondiwindi over nine days. Competitors bunk in anything from swags, tents and motels en route but will culminate at the swank Byron at Byron Resort for a well-earned pampering.

So if you see some outrageous old types, including vehicles, touring your local roads next month, why not flag one down and chip in for a good cause? You'll probably get a good laugh in the bargain!

For entry information on Variety Bashes, contact your local Variety state office. These are listed on the website www.varietyaustralia.org.au or phone (02) 9819 1016.

What is a Bash car?

A Bash car must be a roadworthy 2-wheel-drive vehicle at least 30 years old and must be registered and insured. Performance modifications such as extractors, headers and multiple carburettors are not allowed. All vehicles carry a 40 channel UHF CB radio, are fitted with laminated windscreens with tow bars front and rear. Teams are usually between two and four members and are largely self sufficient with cars carrying extra tyres, fuel, fire extinguisher, 20 litres of drinking/radiator water and five litres of oil. Spare parts including radiator hoses, fan belts, oil filters, air and fuel filters, spark plugs, 10-gauge wire and fencing pliers are also stowed.