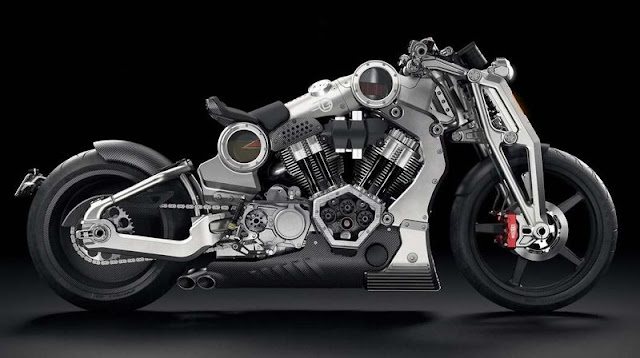 A Confederate motorcycle is a thing of monstrous beauty. Not for the faint hearted or lightly heeled, it’s unashamedly American in every way. Roderick Eime takes up the star spangled banner.

Would you buy an expensive motorcycle and never ride it? Do you consider an item of exceptional industrial design a work of art in line with a Picasso or Dali? Well, if so, you might be in the market for a new Confederate.

While daily road use is possible, the small, select group of Confederate motorcycle owners are more likely to have their machines mounted on a plinth in the man cave next to the IXO Elysium carbon fibre pool table and the William Wiley pinball machine.

The Confederate buyer is more than a mere enthusiast or design dilettante, he (and yes, it’s more than likely a ‘he’) is a true aficionado, a genuine connoisseur whose love of motorcycles transcends the simple joy of riding to one of a near spiritual obsession.

“What we wish to do relative to to our screenplay, our ‘song’, our communication through the machine and the brand,” says Confederate CEO and founder, Matt Chambers, “is to encourage a new approach where every person is nurtured to be exactly what they were born to be. To be completely in harmony with what's going on inside of themselves.”

Now that could easily sound like self-indulgent waffle to the casual listener, but hear me out.

Chambers is not your average guy, not your average businessman, nor even your average visionary. After funding his studies by running his father’s pool hall, he earned a bachelor of arts in business administration from Louisiana State University in 1975, then went on to receive a juris doctorate degree in 1978, launching a solo 13-year career in law in Baton Rouge.

After winning a massive police brutality case in 1990, he sold up in favour of his true love and went on to create Confederate Motor Company, Inc. underpinned by the philosophy of “enlightened design through true American inspiration”.

Chambers doesn’t just pay lip service to this motto like so many hollow corporate mantras. Fiercely patriotic, he adheres to the belief that Americans are among the world’s greatest designers, if not the greatest. Sure, we could argue about that all day long, but he’s just as quick to point out the gaping flaws in the system it has created and why the great American designs have fallen by the wayside in favour of focus group-researched dross.

In a TEDx talk he gave in Birmingham, Alabama in 2011, he articulates both his love and loathing of “the American Way”. You can watch the whole thing on YouTube, but essentially Chambers calls out the slide into rampant consumerism as “a system of chicanery and hucksterism” led by the likes of GM. It’s a system, he asserts, that has turned beautiful and functional engineering into faux-branded consumer junk.

“We’ve lost our core competency,” he tells the transfixed audience, “we have become like the vinyl roof on the Cadillac, the fake wood veneer, the fake hubcaps. It’s a marketing trick, devoid of substance, leaving us empty and helpless with our addiction to consumerism.”

Confederate is his vision of restoring prowess to the American Way through his motorcycle designs which imbue a sense of both strength and rebellion. Chambers says this restoration of essence and culture can be achieved by selfless dedication to purpose and exceptional craftsmanship. Yep, heady stuff alright, but he backs this up with the product, which he describes succinctly thus:

“The new Hellcat we have just completed has the lightest, stiffest, toughest drag race-inspired chassis architecture, spinning the lightest driveline from the heaviest flywheel located at the centreline vertical and horizontal axis of the motorcycle, powered up to the fattest pistons, pushing through the longest stroke, making the greatest amount of torque as a percentage of weight of any machine by far, ever made.”

Let’s just catch our breath for a moment and have a look at what this machine is all about. 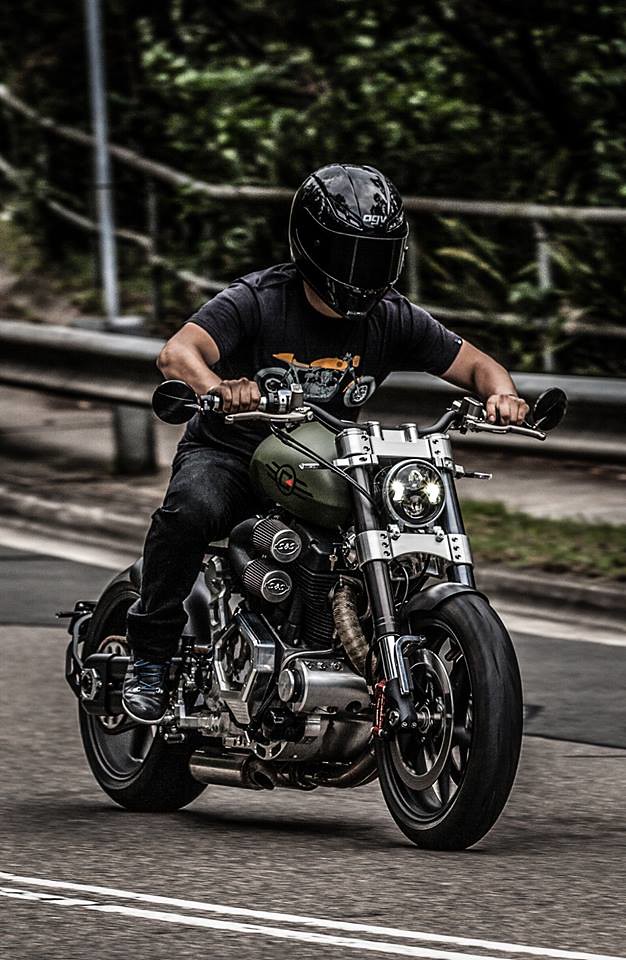 Even for the experienced rider, there is a certain level of apprehension and intimidation that needs to be overcome. All of a sudden there is a massive 2200cc V-Twin capable of 217Nm and 120kW under your butt. That’s about as much grunt as a medium-sized sedan. Not to mention the handbuilt, military grade aluminum chassis machine comes with a pricetag just shy of $100k.

Even though the Hellcat has the appearance of a straight line drag bike, it is surprisingly agile, thanks largely to its low 220kg dry weight and ideal balance. BST carbon wheels and a multi-piston Beringer braking system keep the whole box and dice nicely on the road.

Two 1100cc cylinders ensure there’s plenty movement down there. As the twin pistons work up a head of steam, it’s the kind of intense vibration a brace of Browning .50 caliber machine guns generate, an analogy not lost on this bike with its namesake a brutal WWII US fighter plane. This machine is very much alive, reminding you at every moment of its exceptional capabilities.

The riding position is comfortable as the bike itself is not physically massive like some enormous cruiser with all the trimmings. After a while, the heat transmitted through the headers becomes quite noticeable, especially if you’re idling in traffic. An encouragement perhaps to keep moving on a breezy open road 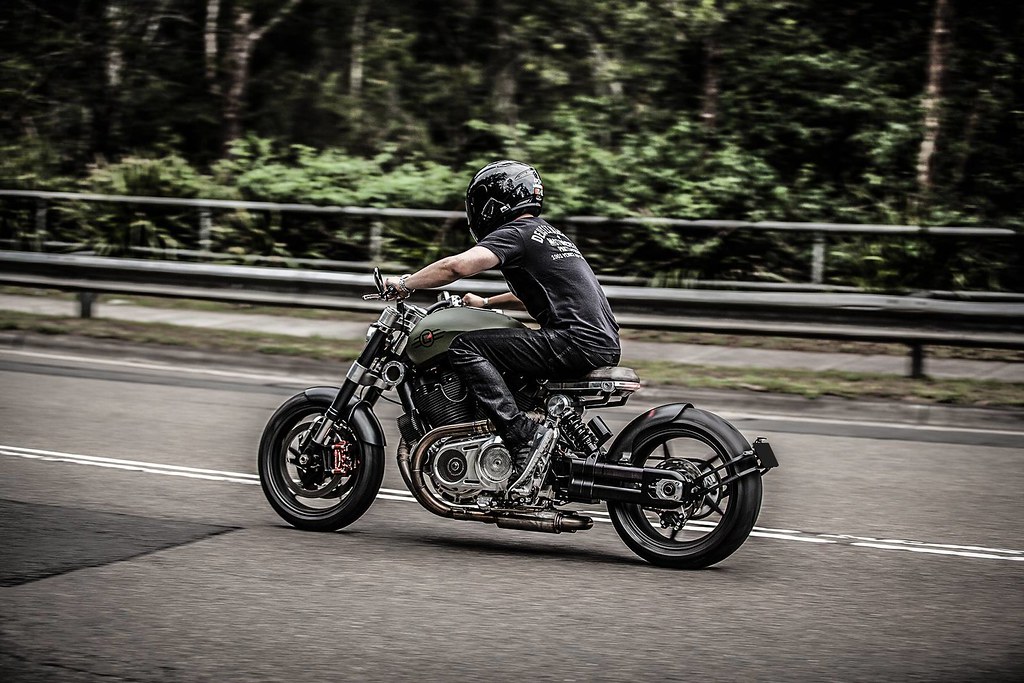 As expected, the Hellcat is a head-turner for sure. Just try and ignore its raw nakedness right down to the exposed timing belt and aluminum framework. It’s a motorcycle few have ever seen the likes of and the thunderous exhaust note gets everyone else’s attention, even if you’re trying to be quiet.

Despite the Hellcat’s visual aggression, it’s a remarkably relaxed bike to ride. This is no sport bike that needs constant encouragement, instead surf the abundant wave of torque that’s right there from way down low in every one of the five close-ratio gears. That said, when the throttles are opened, the acceleration is just off the scale. Despite the very effective 190/55/17 Pirelli Rosso tyres, if the Hellcat had a joystick and flaps, it would surely take off.

The Confederate X132 Hellcat Combat set the record of 172.2 mph on the Bonneville Salts, which translates to 200 mph on asphalt.

The handful of Confederate motorcycles that make their way into Australia and New Zealand come by way of Urban Moto Imports in Melbourne.

With production run numbers in the dozens only, the next to arrive are a pair of FA-13 Combat Bombers, followed by R131 Fighter and P51 Combat Fighter, the world’s first and only vehicle to be carved entirely from solid billet blocks of military-grade aluminum. By the time you read this, someone will have likely shelled out the $200k-plus, but make the call by all means. 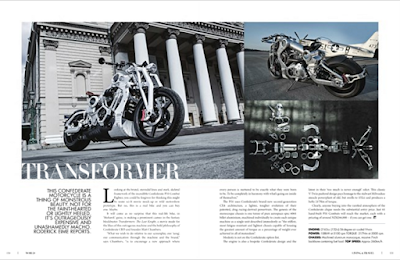 Email ThisBlogThis!Share to TwitterShare to FacebookShare to Pinterest
Labels: Confederate