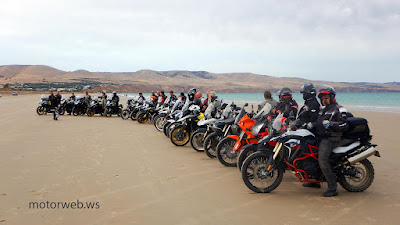 I’ve been on a few so-called ‘shop rides’ now with Harley-Heaven and Victory and I can’t help thinking what a great idea they are for brand and community-building. It’s all well and good to swap yarns and happy snaps on Facebook, but nothing replaces a good ride in the fresh air with like-minded guys and gals.

As fortune would have it, I was in Adelaide for Suzuki’s now annual Adventure Ride where riders of all bikes were invited to Wirrina Cove down the coast almost to Cape Jervis.


All the Suzuki bigwigs were there and I found myself chatting to the GM of motorcycles, the urbane Paul Vandenberg, quite by accident at dinner as well as state manager, Vivienne Hoffmann (we went to the same schools!) and National Marketing manager, Lewis Croft.


“Some brands like to try and make a profit from these sort of rides,” Lewis told me as we waited for our steaks, “but I like to see them as a value-add for customers and a way to keep them in touch with our brand.”

Riders paid for their own meals, fuel and accommodation, but the legwork, route planning, guiding and support was provided by Suzuki, making the whole event feel very professional.


Of course, product placement was a key feature and a fleet of new V-Strom XTs in both 650 and 1000 models joined the entourage, with test rides for all out of Wirrina Cove to Second Valley.


I joined the fray on a brutish Triumph Tiger 1200 Adventure and swapping to the lighter V-Strom for the test ride showed me how light and easy to ride these bikes were. For anyone wanting a jumpstart into proper adventure riding, the 650XT has what you need for under $12k and the big 1000 is less than $19k. Japanese reliability, adequate power and torque, selectable ABS and away you go. The 650s also come in LAMS-approved guise and can later be re-mapped.

Riding pal Stu, who lives in northern Thailand, has been singing the praises of his 650 for the last 18 months, taunting me with snaps from his rides in Burma and Laos.

Our ride through the glorious Adelaide Hills stopped at the Collectable Classic Car showroom in Strathalbyn as well as the popular bike pullover at Mount Compass on the way down and the surf club at historic Sellicks Beach and fun little schoolhouse cafe at Meadows on the way back. All the while, the route was mixed with just the right amount of sealed and unsealed roads to let us experience a taste of adventure.

In a forthcoming issue of Australian Road Rider, I will detail the Fleurieu Peninsula and its many attractions for motorcycle touring enthusiasts. Stay tuned.

Email ThisBlogThis!Share to TwitterShare to FacebookShare to Pinterest
Labels: Suzuki