On the road to Jindabyne and beyond

I was on time. Waiting with coffee in hand at the predetermined cafe. The bearded one pulled into the service station across the road and pumped up his tyres, left his lights on and drained the battery.

Pulled out his power jump starter and shorted the battery pack.

Well, this is starting on a good note.

Sydney was clouding over as we slipped into the M5 tunnel just an hour and a half late. I turned the music up and settled into the rhythm of the freeway.

David McLean has been busy planning routes of a great adventure. So just before Goulburn, we found our first dirt road and I gingerly goosed the throttle for the first of many wheelspins.

"Death, it seems, stalks these roads"

Rabbits, wombats, kangaroos, lizards and feral cats littered the roads. Their carcases bloating in the midday sun. Death it seems stalks these roads. 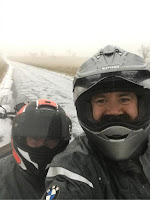 In Braidwood, we raided the local IGA and with the makings of lunch headed to a romantic lookout to eat it. A landslide had closed our lookout so we settled for a romantic shelter looking at an overgrown cricket pitch.

A few hours into the afternoon and about an hour out of Jindabyne, our destination for the evening, the skies looked threatening. Lighting slammed into paddocks to the left and right of our route. Feeling lucky we tried to thread the needle. But we ain't that lucky.

The rain started, no big deal. My visor fogged, I can still kind of see. Ouch, this rain is really hard. Now I cant see as the fogged visor is the same white as the road. Why is the road white?

Sliding to a terrifying stop, hail slammed into my back protector as I lay over the bike.

15 minutes later we decided to continue into the easing hail through a solid inch of ice on the now flooding roads.

Jindabyne never looked so good in the late afternoon sun. The light rolling across the hills on the other side of the lake, made the landscape come to life. Dinner in a boutique brewery overlooking the lake was just what we needed.

The exit from Jindabyne was on the much anticipated Barry Way. Routemaster David had said it was a 'fine road'. So our band of three (joined by Stuart Gard overnight) roared into the hills.

Beautifully graded, hard-packed dirt roads were the order of the day and that just what we got. Stuart pulled out his drone at each stop and tried to not hit any trees or get taken out by an eagle. Maybe someday we can watch all 30 hours of footage.

David kept going on about some Mckillops bridge. A 30-kilometre detour down a crappy road for a rotten wooden bridge. Yip its a bridge. Then back the way we came. Nice one Dave.

By now my confidence in sliding around on the loose dirt was increasing. My hand twisting a little faster. Braking a bit deeper. Then my colleague, also getting a little overexcited, slid off into the trees on one hot corner. Thankfully not a cliff just a few trees and a bit of pride. He emerged giggling and shaking his head. 'too hot!' he shouted, then I think he said something else but I realised with him off the road I now had clear, non-dust-filled air in front of me. See ya, buddy.....

Today was snake day. Black snakes. They were everywhere. I literally saw 5-6 of them but every stick on the road looked like one. Just the biggest incentive to stay upright.

Such an amazing day. Beautifully maintained roads sweeping along majestic rivers and views from clifftops. Hot fast tarmac over Mount Hotham with views of, what seems like, the whole of Victoria.

Now we are tucked up into Bright Vic. The leaves are just starting to turn as the trees get bored with green and experiment with reds and gold.

It wasn't a crash....it was a strategic withdrawal from the vehicle. Anyway, I blame the road for not being roady enough. 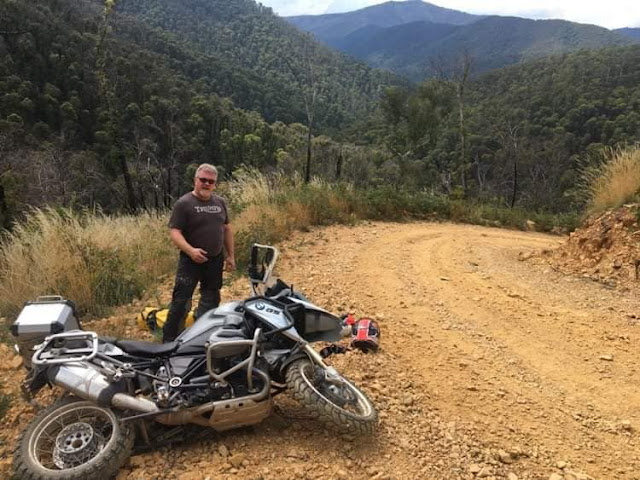 Sunrise in Bright. The birds call the light and the skies shimmer. Spectacular in the extreme.

Breakfast is a combination of corn fritters, coffee and route planning. We are to do 'the horn'. Sounds great. But first, we head up into the pine plantations that rim the valley and take advantage of the view. Unfortunately, as we were departing Davids bike decided that it didn't have any electricity left. After viciously looking at it for 10 minutes Davids plan, brilliant in its simplicity, was to simply put more electricity back in. Easy. So we did.

Ecstatic in our awesomeness and confident in bush mechanic abilities we attacked the road with renewed gusto.

The Horn is a prominent peak on the Mount Buffalo Plateau. The road to it is pure motorcycle joy, once you get around the cyclists. At the top, the little hut/lookout is enough to take your breath away. My fellow travellers insist that we walk to the top of the horn. In motorcycle boots. I almost died. Its 1723 metres and cold and rocky and tight and I don't really hike. The view was huge and worth it. So I am happy they encouraged me to waddle up.

Over lunch at Porepunka pub, new routes were found and dirt roads were to be the flavour of the afternoon.

We wound along the river through forests and bush. The road rutted in corners but fast in the straight. We turned onto Scotsman's river track, and the day got interesting. Now I am not the world best offroad rider. I am learning to not scream every time the back wheel slides but this road seemed ok.....then it wasn't. On a hill and bounced off to the side Cindy stalled. I tried to proceed but she just dug her feet into the ground. So I laid her over to point downhill. Simple. Thankfully my heroic travelling companions appeared and rendered much-needed assistance. 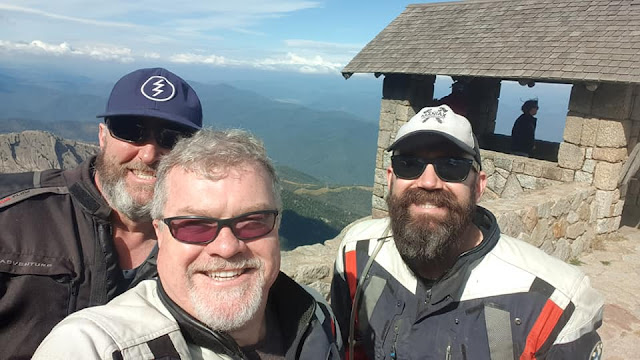 David suggested a strategic withdrawal and the afternoon was spent blissfully sporting through other forests with roads that behave like roads.

The last few days on the road...

We happily ensconced ourselves in a three-bedroom house in the strangely beautiful town of Benalla for two nights. Australian Superbikes were on at the Winton racetrack. The racing was fast, diverse and drama-filled. There are two pubs in town, one feed and watered us while the other (the Northo) didn't want our patronage or money. Benalla has beautiful rose gardens that border its botanical gardens, an art gallery that sits over the river and gorgeous Australian country homes in wide tree-lined avenues. A really nice country town.

David assured us that the route back to Bright would be epic, and it was. We backtracked some roads but we found new routes like Madhouse Road (complete with haunted house) and Happy Valley Way. We played tag along the Omeo Hwy to Mitta Mitta, at unrealistic speeds, then swam in the river out the back of the pub. Rode over Falls Creek and Mount Beauty back to Bright arriving just on 7pm. A huge day of riding and probably the best day of the trip. I had fallen in love with several of the roads today.

Waking early and still talking of the ride the day before we agreed to backtrack over mount beauty and falls creek to the Omeo highway then to Omeo (for the best beef and burgundy pies at Crazy Cow). Out of Omeo David lead us on a merry game of "where the hell are we?!" - finally ending back on the Barry Way heading to Jindabyne. By now the grip on my rear tyres was almost non-existent and the traction control light flashed constantly. So the last 100 kilometres was spent happily drifting the bike around everything, even the straights.

I awoke early....way too early. Bent and broken from a crappy bed. Storms loomed and the weather was forecast. So I opted for a straight shot home via Canberra while the boys didn't.

My tyres are more like slicks now, not the chunky offroad monsters they once were. My riding suit has taken two washes to get the Victorian countryside out of it, and the helmet may get binned.

And that's a result you need.