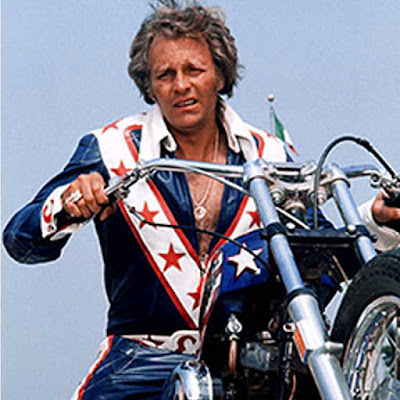 The story of the world's greatest daredevil and his favourite motorcycles

In the rough-and-tumble copper mining town of Butte, Montana, during the late 1950s, a young Robert Craig Knievel struggled to make a name for himself. Having dabbled in crime and worked odd jobs as a miner, a hunting guide, and a motorcycle salesman, Knievel realised that he needed to pick a vocation that, as he described it, “put a lump in my throat and a knot in my stomach.”
Though he started motorcycle racing after his father bought him a BSA 125, he found his true calling when he formed the Evel Knievel Motorcycle Daredevils in 1965. Jumping his Honda scrambler over rattlesnakes and riding through flaming walls, Knievel thrived on the rush from his death-defying stunts. Inspired by the showmanship of Elvis Presley and Liberace, he injected a theatrical, almost gladiatorial element to his performances. His name started circulating and his first appearance on ABC's Wide World of Sports in March 1967 offered him a taste of the tremendous power of television.
On December 3l of that year, Knievel persuaded Jay Sarno, the owner of Caesar's Palace in Las Vegas, to allow him to jump the fountains outside the famous hotel. The ABC network, unconvinced of the stunt ability to draw a sizable TV audience, agreed to air the footage later if it lived up to its spectacular promise. Knievel, confident the jump would be broadcast-worthy, paid a crew to film the event.

After walking through the casino and losing $l00 at a roulette table, Knievel took a shot of Wild Turkey and performed the bone-crushing 151-foot jump that would put him in a coma for 29 days and launch his career. Footage of his landing, which was replayed in slow motion, revealed Knievel separating from his Triumph and tumbling across the pavement; audiences were simultaneously shocked and fascinated by the man whose hubris sent him soaring across the sky on a bike. Though doctors told him he might not be able to walk again without crutches, Knievel returned to jumping in order to satiate his new national audience – and cover his hospital bills. Several performances and more broken bones later, he became disenchanted with Triumph for not paying him to ride its bikes and signed a deal with American Eagle, a company that applied its nameplate to Italian Laverdas.
In late 1970, as American Eagle went out of business, Evel Knievel signed a new deal that would mark a milestone in the evolution of his image. Harley-Davidson provided bikes and a generous sponsorship deal for Knievel, whose renegade persona seemed perfectly matched to the manufacturer of "Great American Freedom Machines." His first jump on a Harley came on December 12, 1970, in Los Angeles, where he successfully cleared 13 cars at the Lions Drag Strip. Finally, Knievel's notoriety allowed him to cash in on his success, and though painful injuries were a frequent result of his jumps, he enjoyed widespread recognition and travelled in an exrravagantly customised 60-foot 18-wheeler. A telling plaque inside his truck displayed a quote from Robert Frost: "The people I want to hear about are the people who take risks."
The new Harley-Davidsons, on which he would perform several of his most famous jumps, began as stock dirt trackers. In 1970, while professional racers were waiting to ger rheir hands on the highly anticipated aluminium-engine XR75Os-which replaced the archaic iron-barrel ys15i6n- Knievel was provided with three: one for jumps, another for wheelies, and a spare. He hired three-time Daytona 200 winner Roger Reiman to modif' the bikes for jumping, a function dramatically different from their original purpose. The minimal wheel travel of the stock XR750 made it poorly suited to the task of hard landings, so Reiman installed a heavier-duty front end with thicker shock absorber oil and heavier shocks ar the rear. When wheel spokes broke during one of Knievel's test jumps, heavier-dury rods were installed.

In spite of its suspension reinforcements, the 300-pound bike created considerable compression upon landing. The rear shocks were known to completely bottom out when they hit the ground first, and though the Harley was not meant to land on its front wheel, when it did, its shock seals tended to blow. Because trackers were nor traditionally equipped with brakes, Reiman retrofitted Evel's Harleys with front and rear drum units taken from late 1960s Sportsters.
Adding a touch of showmanship and occasion to each event, the Harley's tanks were painted with themes that corresponded to the jump, and unlike traditionally functional dirt trackers, the bike's metal parts were chromed.
Evel enjoyed his association with Harley-Davidson not only because their style suited him but also because of their crowd-pleasing exhaust roar and the wheelie-popping torque produced by their V-Twin powerplants. Though he had no specific prejump ritual, friend Earl Castine remembers Knievel carrying a lucky rabbit foot, and that in the hours leading up to the main event, Evel "psyched himself up by changing his personality; he’d get on edge a couple hours before he was going to jump." In practice runs, Knievel rode toward the ramp, experimenting with different speeds, veering away at the last moment to get a sense of what kind of takeoff velocity he would need. His Harleys lacked speedometers and tachometers and Knievel flew by the seat of his pants, trusting the sound of the engine rather than distracting himself with gauges.
He hated the idea of unnecessary gear shifts as he approached the takeoff ramp, so Reiman installed crankshaft sprockets that, depending on the ramp length, allowed the bike to always leave the ground in second gear. Evel equipped his motorcycles with parachutes (which were emblazoned with the lucky horseshoe logo of one of his sponsors, Olympia Beer), but one mid-air deployment during a demo in Atlanta decelerated the bike so suddenly that he decided to only use it for show after most of the speed was scrubbed off with his brakes. During another jump, the chute became entangled in his rear wheel, creating even less of an argument for the gimmick. 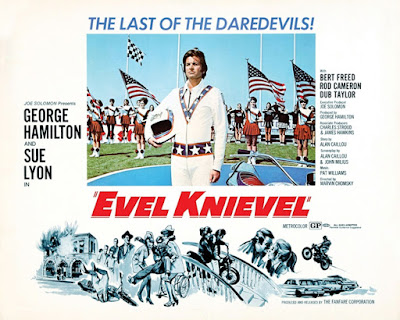 Knievel, whose popularity grew dramatically during the early 1970s, wore the Harley-Davidson No. 1 logo without irony; it was a shameless symbol of his assertion that he was at the top of his field, the real deal in a world of imitators. During an unscripted moment at one of his jumps, Knievel psyched up the crowd, rode up to the top of the ramp and had friend Mike Draper pull the safety pin on the parachute, which meant he was ready to jump. However, this time he told Draper to keep the bike revved, and he walked to the announcer and asked for the microphone. "I knew there would be a day in my life when I'd be too scared to jump," he told the crowd, which had quickly quieted. "But tonight," he continued, "is not that night."
Knievel took his exploits a step further in 1974 by attempting to jump Utah's Snake River Canyon in a purpose-built, jet-powered rocket. The parachute deployed prematurely and smashed the rocket against the cliff s edge, but Knievel would have perished had his craft landed in the river's rushing waters.
In May 1975, Knievel drew a record audience of 90,000 people at Wembley Stadium and jumped 13 double-decker buses. Though he broke his pelvis upon landing and announced minutes later that he "would never, ever, ever jump again," his Harley's bent frame was replaced by Reiman in time for a comeback jump five months later at King's Island in Ohio. He outdid his prior effort by flying over 14 Greyhound buses, setting a record for the top-rated ABC Wide 'World of Sports' program and commanding a 52 per cent share of viewership.
Evel Knievel final major stunt, in which he attempted to leap over a tank of live sharks in the Chicago Amphitheater, was performed in the winter of 1976. Cancelled after a botched practice run that injured a cameraman and broke both of Knievel's arms, the event conclusion only furthered the mystique of his fearlessness.
Though Evel's ties with Harley were temporarily severed alter an alleged confrontation with an associate involving a baseball bat, both ultimately benefited from each other's iconic brands. One of Knievel's Harley-Davidson XR750s was donated to the Smithsonian National Museum of American History. The bike jumped at Wembley, King's Island, and his final performance is still owned by Knievel, and its dented tank bears the event's custom paint job, which depicts a shark rising below the Chicago skyline.

Evel has broken 35 bones*, many of which he has rebroken numerous times, a statistic observed by the Guinness Book of World Records. Though his life has been punctuated with physical suffering, it has also been lived without regret. Theodore Roosevelt's words, which Evel has often quoted, elegantly capture his motivation: “Far better it is to dare mighty things, to win glorious triumphs even though checkered by failure, than to rank with those poor spirits who neither enjoy nor suffer much because they live in the grey twilight that knows neither victory nor defeat.” It is a testament to the veracity with which Evel Knievel has lived by those words that thousands converge yearly upon his hometown of Butte, Montana, to pay tribute to the original daredevil.


Postscript: Evel Knievel passed away on November 30, 2007 at the age of 69 after a tumultuous life that saw him jailed for assault in 1977 and declared bankrupt in 1981. He maintained a strong anti-drug stance and was a firm supporter of helmet laws in the USA declaring his Bell helmet had saved his life more than once.


* His entry in the Guinness Book of World Records states he suffered 433 bone fractures by the end of 1975. http://www.guinnessworldrecords.com/world-records/most-broken-bones-in-a-lifetime