Put the S into Sportster with Harley's all-new sport cruiser. 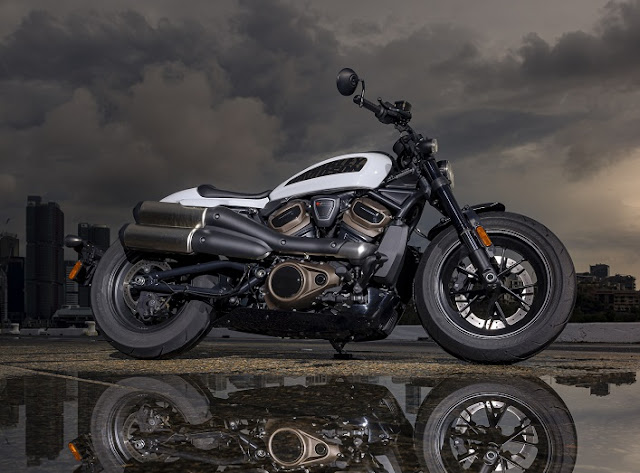 Born in 1957, the Harley-Davidson Sportster celebrates 65 years this year and has demonstrated lasting desirability with Harley fans and riders. 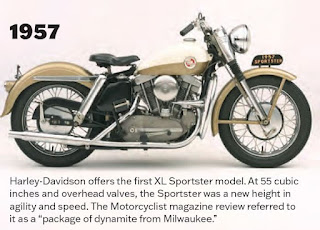 Conceived as a stylish, lightweight sports bike it has remained the longest-lived motorcycle line in the entire Harley-Davidson family. Derived from the side-valve 750cc Model K, introduced in 1952, the Sportster was known as the XL series until last year (2021) and had surprisingly little modification over more than half a century.

The 883 cc (53.9 cu in) and 1,200 cc (73 cu in) Evolution engines replaced the older ‘Ironhead’ in 1986 and the transmission uprated to 5-speed into 1991. Now, when 65 normally signifies retirement, the Sportster is undergoing its most radical reworking ever

Earlier this year, the Revolution Max engine broke cover in the guise of Pan America and had the critics in a tizz. This engine is a complete departure from the archetypal air-cooled, 45-degree V-Twins that has so defined the Milwaukee brand for decades. As we found in Pan America, it is lively, smooth and full of surprises.

Demonstrating the versatility of this new powerplant, the 1250cc, DOHC 60-degree, water-cooled V-Twin is designated T for the Sportster S, whereas the Pan America was S. This particular RevMax engine is different in that it produces more torque at lower revs and it actually produces less power up high than in Pan Am indicating, in my mind, its suitability for urban environments rather than long-legged highway cruising.
On the twisty, serpentine roads of the Adelaide Hills, the new Sportster can really show its mettle. I've ridden all kinds of bikes on these roads and the new 'Sporty' is quite at home. The fat tyres reduce nimbleness slightly, but for regular riders like myself, there's more than enough liveliness.

The Sportster S is a good 30kg lighter than Pan Am and despite some structural similarities, looks for all the world like a completely different bike. The RevMax engine is a structural element of the chassis, eliminating a traditional frame. H-D tells us this feature significantly reduces weight and results in a very stiff chassis.


We could prattle on all day about the tech stuff which you have probably read already. So let’s throw a leg over and see what all the fuss is about.

At the Sydney launch in December, it was a bit of a choreographed affair and not a great indication parading around in the traffic and rain. So I was delighted to get the chance to unleash the beast on a proper weekend outing as an owner may choose to do. To this end, I rounded up cousin Jason on his big BMW sports tourer and headed north out of Adelaide into familiar territory.


First impressions. While some have made comparisons to the V-Rod, my recollections come more from the short-lived FXDR, certainly in terms of riding position and wind-in-your-face nakedness. Our test bike came with the standard small solo seat and the standard forward controls which, again, reinforced in my mind its intended habitat of (sub)urban use. A few hours on the road at highway speeds and this old guy’s dodgy back was starting to give grief.


If your intention is to do extended touring, you’d be better off, in my opinion, with the Pan Am which I could ride all day - and the next - and did, for two weeks solid. However, Sportster’s companion accessory list does include touring luggage, comfy Sundowner solo seat, matching pillion seat and backrest, a mid control set and a quick release windscreen. The last two would be on my shopping list and could well make a touring bike out of it yet. Also on the list is an extended tail guard that will keep water and grit off your back. The exposed rear tyre looks mean and cool, but you’ll quickly get a wide, wet stripe up your back in even light rain.

Despite the sacrifice in power in the T-spec RevMax engine, this bike is no slouch. You have three preset and one custom ride mode to choose from. Wet, road, sport and custom. Each, as you would expect, tailors the ride to the conditions or desired behaviour. All take advantage of the Sportster S’s advanced rider aids that include cornering-enhanced ABS, traction control and engine mapping. Each setting is self-explanatory and - let me tell you - when Sport is selected, this baby likes to get going, so hang on!

The single control dial does take a bit of getting used to. Many of the features, like navigation, for example, require the H-D app (in both IOS and Android) to communicate with the bike. New to H-D bikes is the Cornering Enhanced Drag-Torque Slip Control System (C-DSCS) which stops rear wheel lock-up on downshifting. Nice. Plus tyre pressure monitoring.

All that remains for you, dear rider, is to get into your H-D dealer to make up your own mind. Book a test ride.

Read on: Heavy Duty Magazine has an expanded first impression in the current issue (180)