Custom exhaust systems for Harley-Davidson: We test TBR 2-into-1 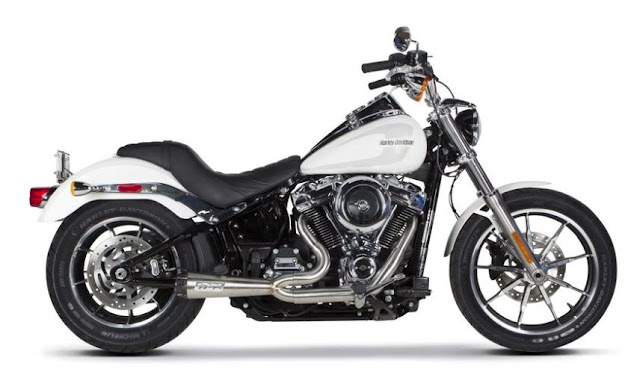 The switch to a custom exhaust system is probably one of the most frequently considered and executed aftermarket modifications for any bike owner. But what things do you need to consider? Will you get a big power boost from a fancy new exhaust system?

Well, we did just that. Motorweb's publisher, Rod 'Rowdy' Eime, bought a Two Brothers Comp-S 2-into-1 for his stock FXBB 107 Street Bob. Apart from waking the dead, is a new exhaust really worth the effort and expense?

I’m guessing that Harley-Davidson owners like myself are probably the best customers for aftermarket exhaust systems with a wide range of options from simple slip-on mufflers to full systems right from the header. Of course, custom exhaust systems are available for pretty much any bike on the market and the principles still apply.

Two Brothers Racing from the USA, (supplied by Moto National Australia) makes an enormous range of pipes for sportbikes, cruisers (like my FXBB) and even offroad. You’ll find the one I fitted under part # TBH005-4960199-SG, with an RRP of A$1299. Yep, these full stainless systems are not cheap. Then add fitting, which I had done by Dean at Loaded Motorcycles, Kirrawee.

So, if all you’re after is a bit extra growl, the slip-on muffler is the way to go. Roughly half the price of a full system and generally easier to fit. Slip-ons simply replace the end section of the exhaust system, leaving the original header pipes attached to the cylinder heads. The performance increase is minimal, with some manufacturers claiming maybe 5-6 per cent while other reviewers saying virtually nil. But you will make more noise, guaranteed.

TIP: be sure to use brand new seals and gaskets. Leaky exhausts are all kinds of nasty.

The full systems, which replace your original pipes all the way to the cylinder heads, are the first part of your journey to realise truly measurable performance increases. But to get the full benefit, you must commit to upgrading all the ancillaries, namely air intake and engine mapping. It follows that if your exhaust is allowing a greater outflow of gasses, then you must provide the required increase in the air intake. Then this new equation needs to be conveyed to the engine’s EFI system so it can recalibrate for the extra combustion.

In Harley Land, you’ll know this as a Stage 1 upgrade ie pipes, high volume air intake and electronic tuner. Beyond that, we start talking about new, higher lift camshafts and big bore kits to increase displacement. That discussion is for another time.

So, even though I only changed the exhaust system, did I get some performance benefit? Indeed I did. My scientific measurements were conducted by the seat of my pants and I certainly noticed a freer revving engine that seemed to reach peak power sooner. Just how much more power exactly I can’t say, but independent tests on Milwaukee 8s fitted with the TBR 2-1 set up, show increases of about 6hp at around 4700rpm and increased torque by 4ftlb at 400 lower RPM

You can hear TBR systems for yourself with sound clips on the website:

Some things to bear in mind.