Inveterate rider and friend of the MotorWeb, Paul 'Digger' Davies, heads into the wilds again in search of fresh air and wide-open spaces. What does he find? Read on.

Work has given me four days off in a row. So I rallied the troops for a weekend of cautious legal speed limit adventure riding. I am not sure if it's David's mystery road navigation techniques or the fact it's getting cold but only a few were keen.

We spent the weekend prior fitting new rubber to the GS and GSA. A skill that with time I am sure will not take three hours to complete. This in itself was brilliant fun and had us good-naturedly swearing at the tyres and falling around in fits of hysteria.

The weekend could not come quickly enough and the week dragged on endlessly. Friday saw me in the most chipper of moods and even the usual casual abuse from the human detritus on the bus saw me wishing them a good weekend as they departed.

Finally Saturday. It's 7deg and Jindabyne the destination today is 1deg. So many things were layered upon my body to combat the cold, that I felt like the Michelin man.

David McLean and I met at the cafe around the corner and Fred, David's father in law, joined us. He is on a Ducati Multistrada with road tyres so this should be fun. We met Stuart Gard at Bungonia for coffee but the cafe was closed so we had 'faken' and eggs (fake bacon) at a cafe 20 minutes further on.  Routes at this point were shared and our ragtag band wiggled into the day. Dirt, rivers, dust, kangaroos and utes for a few hours then we were just on the other side of Braidwood for lunch. David had made curry chicken pieces in Lebanese bread. Stuart captured the whole thing on drone footage and terrified the local birdlife.

Afternoon roads were fast and slippery as we chased the sunset and the last remaining degrees of heat left in the day.

Dinner at the Jindabyne brewery was as rewarding as the last time apart from the woman with the drill like voice and shrill cackling laughter who insisted on joining the end of our table.

Sunday looks cold, really cold so that should be fun.

The last post played on the TV as I made the first coffee of the day. It's 0degs outside. Today everything is to be worn at once then peeled off layer by layer as the day warms.

7.30am breakfast at Birchwood Cafe in Jindy is never a disappointment and the waiter was more than capable of dealing with Fred's menu demands and his staunch adversity to aoli on B&E rolls.

Today is a short 213 km run to Tumut that will take all day. We roll around the lake and through pastoral roads, terrifying the sheep, to Adaminaby. Here we collect supplies for lunch in the bush. David returns from the shop with 2-minute noodles and chips. He has parked behind me and as I roll back to leave I hit his bike with mine. Thankfully no damage to Cindy.

We head to Tantangara reservoir part of the Snowy 2.0 project and we see our first herd of wild brumbies. Incredible to see. Still reeling from the experience and my head elsewhere, I stop to park the bike, forget the sidestand and fall over into the bullbar of a parked ute. What a Muppet.

I had been promised a 300metre water crossing, with water as deep as the front tyre. I had prepared. I was wearing my waterproof underpants. But arriving at said local no water was to be seen. It seems someone let the plug out.

David had planned to meet up with some guy on the road to Brindabella. So on the turnoff, with the sign saying 'No Through Road Barrier in 18 kms' Fred and I waited and had noodle lunch in the trees while Dave and Stuart went off to confirm the signs true meaning. Returning, sans new friend, we dove into the forests. The tracks were tight, rocky, sandy, muddy, steep and glorious. Fred, battling his way on road tyres, was sent on his own track back to Brindabella with the hopes of meeting up with the guy we couldn't find.

We settled into rough tracks in the Kosciuszko national park and slid round deep gravel roads through neverending pine forests, the route finally giving way to fast switchback tarmac off the top of the mountains surrounding Tumut.

Our new riding companion arrived as we were unpacking. Rob had been waiting in Brindabella all afternoon for us. The question was why didn't Fred see him? Then Fred rolls in covered in mud. Finally the tyres had conspired against and thrown him roughly to the ground.

Beers and Thai food at the pub then snoring. 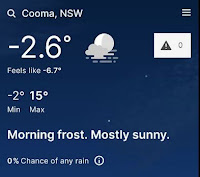 A cold start again, but the blue sky promised a beautiful ride.

The usual coffee, eggs and routes are the first things to do. We sat shivering in outdoor seats trying to consume enough caffeine to motivate oneself into the next eye-watering few hours of dealing with super-chilled air forcing its way into all those little nooks and crannies not sealed against the wind.

Fred had left sometime in the wee small hours heading home. This left our number at 4 again. Rob had come on his brand new R1250GS but had, like Fred, shod his steed in road rubber. This had given him a most unexpected small 'off' the previous day while practising in the gravel.

So with this in mind, we shot off into the pine forests and the 2-inch deep blue gravel that covers its roads. Not sure Rob was that impressed but he pushed on without complaint all day.

Today was all about the dust. With it having been dry for a while after the wet of a few weeks ago and there being no wind today, the clouds of dust hung in the air and soon both man and machine were coated in a fine powder. Like adventure powdered donuts. Mmmmmm donuts ...

We pushed on through Wee Jasper forest into Yass for lunch and fuel, then the dustiest road in existence to Crookwell and into Taralga to watch the wind turbines slowly turn in the afternoon breeze. One of our staple ride roads is the Swallow Tail pass. It drops into a gully via a series of sharp switchbacks to a river crossing then similarly climbs out the other side. It's rocky and technical at the best of times. It's proper terrifying at the moment. The rains had washed all the topsoil off the surface and huge gouges were left. Ruts and rocks rattled me to the bottom where we discovered the river had piled all its smooth rocks over the water crossing. Smooth slippery rocks the size of baseballs piled knee-deep and large heavy bikes ridden by middle-aged donuts do not go well together. There are now deep wheel ruts with footprints on either side through the causeway and maybe the imprint of one donut having a rest. Hot and sweaty but with a deep sense of pride in my ability to hold on for dear life and hardly scream incoherently into my helmet we emerged rather unscathed. All that was left was the run home on the Hume.

These trips keep me sane in our current world reality. And while exotic Tumut may not be on everyone's list maybe you should go have a look. The Brumbies are worth the trip.