Gettin’ Our Guzzi On. 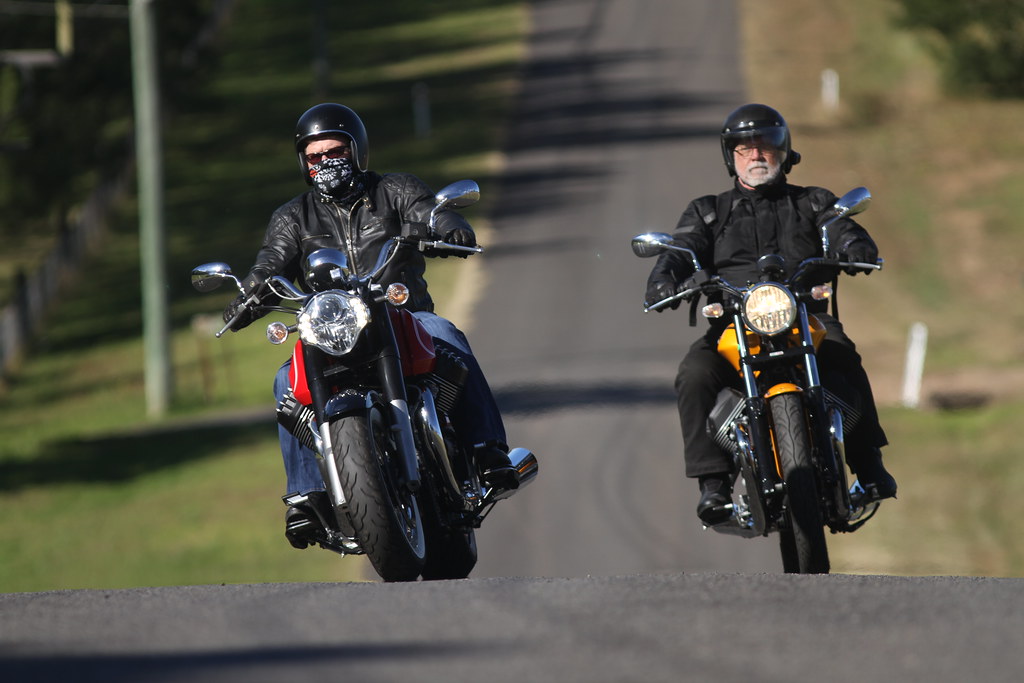 Could we do him a favour? That was the question Paul McCann of PS Imports asked me when I enquired about a Moto Guzzi test ride.

“We have three demo bikes that need to come back to Sydney,” he asked, “You’ll need to go to Brisan’s in Newcastle though.”

Well, that took all of a few seconds to decide, so it was on the phone to riding mates Dave and Paul (aka the Grey Ghosts) and onto the early train to Hamilton where Tom Carrigan had just finished moving the dealership from Broadmeadow to spanking new multi-brand premises at Islington.

And there they were. Three Italian beauties lined up like a Federico Fellini casting call. A sweet V7 II Special in pigtails, a cheeky V9 Roamer in strapless gold and an amply-proportioned California El Dorado in flirtatious red, all clamouring for attention amid the rabble of Japanese, American and German hopefuls. Sweet Vee, Roma and Elle, lovely to meet you.

Time to get acquainted. So, after a short ride and small talk around Newcastle’s waterfront, choked with pre-V8 Supercar earthworks, it was decided to head to the famous Putty Road for a proper ride on our return journey.

Anyone who knows Sydney and owns a bike knows the legend of the Putty Road. The first road to link the growing colony of Sydney to the Hunter Valley was hewn out of the rocky gorges and creek beds, following many Aboriginal paths, past the Colo River, through what is now the Wollemi and Yengo National Parks.

First surveyed by the chief constable at Windsor,  John Howe, and his team of free men, convicts and Aboriginal guides almost 200 years ago, it opened as a road of sorts in 1823 and was quickly employed by cattle rustlers and bushrangers preying on the lonely travellers who would take up to two weeks to make the full journey from Sydney to the Hunter Valley.

In WWII, with the realisation that there were few usable roads in or out of Sydney, the Putty Road was hastily upgraded for motor traffic much like the Bells Line of Road. It was declared a main road in 1945 and fully sealed in 1964. Since 2013, it has actually lost its numerical designation as part of State Route 69. What that means for the road itself, I don’t know.

When tackling the Putty Road most riders will depart Sydney and head north, perhaps just as far as the iconic Grey Gum Cafe, 90 clicks north of Windsor, and be back home in time for tea. Setting out from Singleton for the full reverse route, was a bit of a novelty for this rider.

Alternatively, riders can complete the full loop via Bucketty and Broke ex-Sydney (about 350kms), but that’s for another story.

So, where was I? Ah yes, tutte le ragazze.

Out of Singleton and Broke, you find the sweeping flat plains that so impressed our bobby from Windsor in 1820. The roads are in excellent repair, or they were when we rode, although as you progress, you'll come across patches of broken bitumen and corrugations where heavy vehicles are common. This is where we found the ride qualities of the three bikes start to differentiate.

Elle, in all her buxom boisterousness, is ready to do your bidding. Around town there’s an unmistakable, but perfectly forgivable vibration as the 1380cc SOHC, 8-valve powerplant  awaits further instructions. Out in the open she sings an aria as the power is delivered smoothly and effortlessly and there’s no need to chase the red line as the ample torque from 3000-4000rpm propels you delightfully without wringing her neck.

If the power delivery is not to your liking, remap to suit your taste and conditions. Three settings are available: Tourismo, Veloce (fast) and Pioggia (rain). Traction control and ABS complete the package.

David reports Sweet Vee is another delight. A little more coaxing is required to excite the 750cc, but the ride is smooth and the throttle responsive, and there’s no difficulty encouraging her to dive into the tighter bends that appear as we enter the shady confines of the national park. With the classic retro leather panniers, tiny but welcome windscreen and his ample physique, David could well be the world’s fastest postie.

Paul, however, is not enjoying his first date with Roma. She’s playing hard to get and by the time we arrive at the Grey Gum, the two are barely on talking terms. Don’t get me wrong, if anyone was going to get her in the mood, it would be Paul. He’s our pacesetter, frequently eloping into the distance with whatever takes his fancy.

“It feels like a very ‘70s’ bike,” says Paul with a bit of a grimace, “It’s hard in the front and soft in the back and a bit skittish on the uneven corners.”

Characteristics that could well be ironed out by an astute suspension tuner, but today she’s flighty and a bit of a handful. I try to to console her on the run into Windsor but at times I feel like I’m riding a jackhammer. The 850cc V-twin is not the problem. There’s plenty of velvety torque in every gear, enough to pull from low down in the tight corners, even if the throttle is a bit ‘snatchy’. The minimalist single dial, no tacho and a constantly flashing up-change indicator can make the conversation a bit abrupt.

We conclude the V9 is an urban bike, especially in this trim. In any of her other outfits, like svelte satin or lurid red, she will no doubt turn heads at your Bondi hipster cafe.

By late afternoon in mid-Winter and we’re getting dark, but if you’re still up to it, it’s easy to take a right after the Colo River and head along any of the back roads to Kurrajong for some great views all the way to, oh I don’t know .. forever.

Our dates done, the tempestuous trio are now safely returned to Bikebiz at Granville, making friends with the toffee-nosed Triumphs, no doubt. And gentlemen seeking a curvaceous cruiser for weekend outings, town and country, would be well advised to call upon the delights of Elle, our unanimous favourite.

Writers Disclaimer: The Putty Road, while an exciting and challenging route, is not without its dangers. Oncoming traffic, narrow sections, rough verges and suicidal wildlife all conspire to make this ride one that should be treated with utmost respect. You are encouraged to ride conservatively to prevailing conditions with full protective kit and not endanger yourself or your fellow riders.

Head south across the railway line via Mount Thorley to Bulga.

These are some of the Putty Road’s best and most challenging sections. Proceed carefully, especially if this is your first time. Beware of trucks.