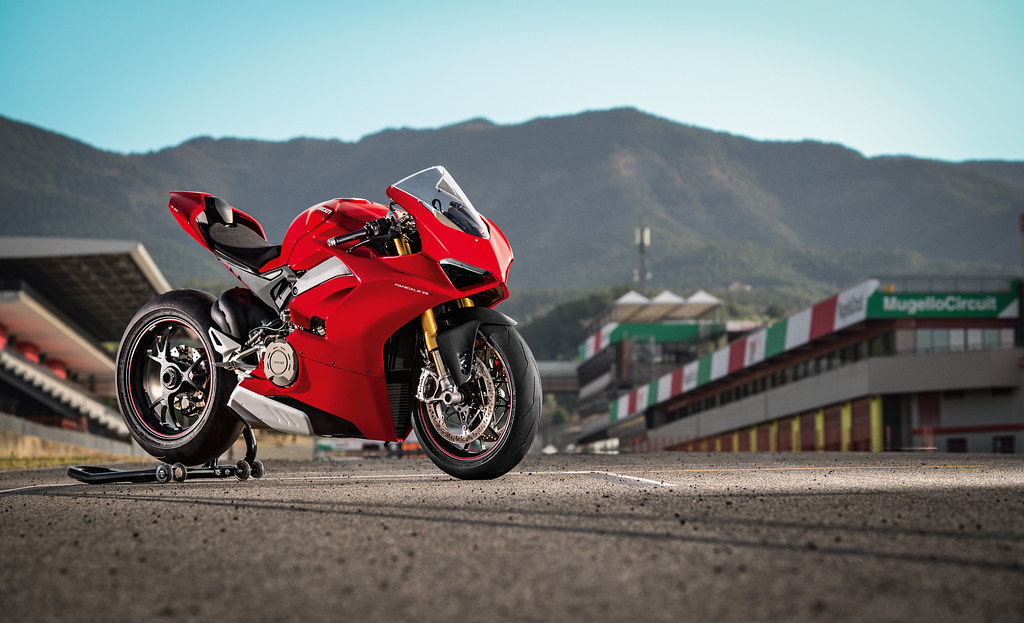 When the team at Ducati 'go back to the drawing board' it can only mean big things are afoot.

Earlier this year, Ducati wheeled out what was claimed to be the world's fastest, most powerful production sportsbike. The motorcycle world took a deep breath and watched closely as the Ducati Panigale V4 smashed records even under critical independent testing.

Essential data such as 1103cc, 157.5kW (214hp) and 195kg (kerb weight) all added up to one frighteningly quick bike on paper. Could this new V4 meet or even exceed the lofty expectations of the world's critical Ducatisti?

Those with even a superficial knowledge of this iconic Italian brand will know that V4 engines do not feature prominently in Ducati's historic model line-up. Apart from a limited run of the RR (Racing Replica) tens years ago, the trademark air-cooled 90 degree V-Twin (aka L-Twin), with its signature throaty howl, has been the basis of Ducati street-legal motorcycles for decades. So what precipitated this revolutionary departure?

The model it replaces, the 1299 which was unveiled in 2014, still employs the traditional V-Twin, while the all-new V4 is derived directly from the MotoGP racer’s Desmosedici V4 with its smaller 1103cc displacement and an eye-watering 14,000rpm red line. Ducati has employed the V4 in MotoGP since 2003.

Riders report this awe-inspiring machine to be among the most powerful, fastest accelerating production bikes ever tested. Independent tests have seen top speeds in excess of 300kmh and 10-second/240kmh ¼ miles. That's damn near 200mph flat out on the old scale.

“The engine is powerful over the entire span of use starting from low rpm,” says MotoGp champion, Casey Stoner, “Power delivery is always full and smooth.”

There's a whole technical dossier devoted to why Ducati made the monumental switch from two big pots to four smaller ones, but the executive summary essentially states that it's all about delivering reliable and useable power. The engine internals are a magical convergence of the right bore and stroke, valve timing, exhaust and (variable) inlet dimensions. All this is governed by a Bosch electronics package (read: ABS plus traction, drift and wheelie control etc) that allows mere mortals to ride the red beast without instantly propelling themselves into the afterlife.

We all know the sound of any motorcycle is as much a part of the experience for a buyer as the mechanical and electronic wizardry. When you hear the V4 around town, it still retains the essential aural tones of its V-Twin pedigree thanks to the clever firing order of the four pistons. The Twin-Pulse ignition system fires the two left-hand cylinders in quick succession, followed by the two on the right.

The new machine required a completely revised frame design, trickier electronics and also employs a counter-rotating crank. For most of us, the unconventional rotation of the crankshaft will have little bearing as we tootle around town, sprinting between red lights, but serious riders will rejoice in enhanced stability and agility such as a lower front profile which tends to keep the wheel on the tarmac, resulting in a very noticeable boost in manageable acceleration.

I can see you already reaching for your shopping list, but before you write Panigale V4 under the heading 'Christmas', you need to know which model to ask Santa for.

If 'base model' is the right term, the Panigale V4 is complemented by two enhanced models. The first, V4 S, has electronically adjustable Öhlins suspension which can be set to either sport, race or street modes along with a lightweight lithium battery (as opposed to lead in base) and forged, weight-reducing aluminium wheels. The premium V4 Speciale further adds adjustable footrests, an Alcantara-trimmed seat, carbon-fibre mudguards, a data analyser system and race fuel cap. Its most notable extra is an Akrapovič titanium exhaust and race kit which Ducati claims to increase power from 163 to 169kW. With just 1500 units of the Speciale built, all pre-sold, it might take more than Santa Claus to make that dream come true.